The Bold And The Beautiful Recap Friday, March 29: Katie And Bill Are Set Up– Hope Makes A Huge Promise For The Future 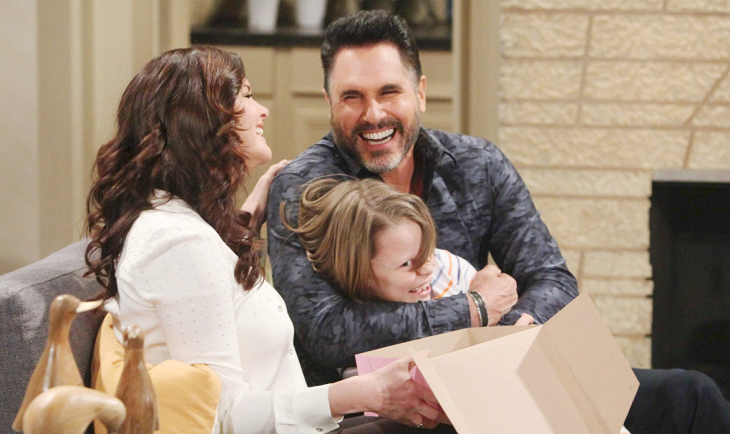 The Bold and the Beautiful (B&B) recap for Friday, March 29 finds Katie Logan (Heather Tom) and Bill Spencer (Don Diamont) wondering if they might have been set up by their peers.

B&B Spoilers– Douglas Is Getting Attached To Hope

It begins with Brooke and Ridge arriving at home and asking Thomas Forrester (Matthew Atkinson) how Douglas is coping with the loss of his mother, Caroline Spencer (Linsey Godfrey).

Douglas admits that he misses his mother, however, he does admit that he also likes that Hope has been spending a lot of time with him. Brooke asks Douglas is she can prepare him something for lunch, but the young boy says that he would rather go see what Hope is up to.

At the cabin, Liam Spencer (Scott Clifton) tells his wife Hope that he’s really proud of all the steps she’s taken lately. They then discuss Douglas. Hope then mentions that she feels a strong connection to Douglas, mostly because they are both mourning the loss of someone they dearly loved. Hope then takes a call from Brooke, who tells her that Douglas wants to see her.

Liam gets cut off by Hope when he says that Thomas and Douglas have their own future and family, while they should be more concerned about their own. Douglas tells Hope that he missed her the same way he misses his mother. Hope then promises Douglas that she will always be there for him, no matter what..

Over at Bill’s office, Wyatt Spencer (Darin Brooks) reiterates that his future is at Spencer Publications. Katie tells Wyatt that she’s happy to have him back. Bill’s surprised when she says she got a text asking for her to come back.

They discuss Caroline’s passing when Chef Chambre (Tamar Braxton) appears. It looks like she’s prepared a romantic dinner for two. Bill and Katie can’t help but feel as though they’ve been set up, but they just don’t know by who.