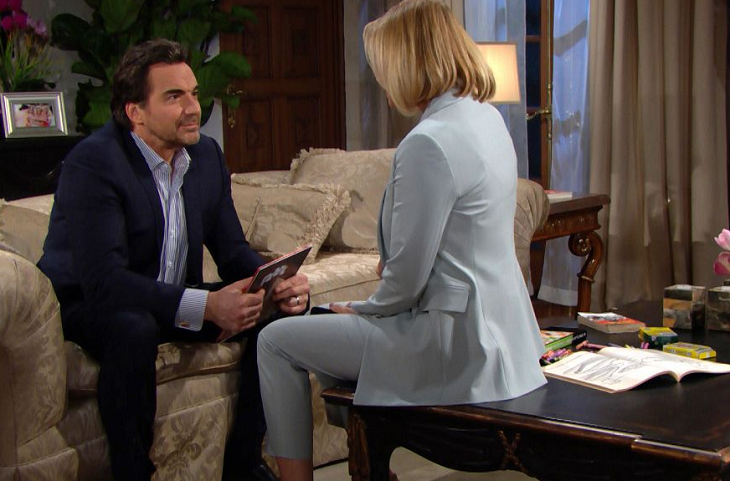 The Bold and the Beautiful (B&B) spoilers for Monday, April 1, tease that Brooke Forrester (Katherine Kelly Lang) will be on the warpath. She’s just learned from Ridge Forrester (Thorsten Kaye) that Taylor Hayes (Hunter Tylo) is vying for Hope Spencer (Annika Noelle) and Thomas Forrester (Matthew Atkinson) to get together.

Taylor has noticed the deep connection that Hope has with Douglas Forrester (Henry Joseph Samiri), and she’d like Hope, Douglas, and Thomas to become a happy little family.

Of course, Taylor’s got an ulterior motive. She wants Liam Spencer (Scott Clifton) to be freed up for her daughter Steffy Forrester (Jacqueline MacInnes Wood), so that Steffy and Liam can be a family with Kelly Spencer (Chloe Teperman and Zoe Pennington) and “Phoebe Forrester” (Isabella de Armas and Redford Prindiville). All Taylor wants is for her daughter to have Liam back.

The Bold and the Beautiful spoilers say that Brooke is going to be furious with Taylor, and she’ll take the first opportunity to confront her about it. And of course, things will quickly turn into an argument about Brooke and Taylor’s decades-long rivalry. Brooke will accuse Taylor of using their daughters to continue their own feud. It will be a bad scene.

Bold And The Beautiful Spoilers– Bill And Katie Investigate

Meanwhile, on the new episode of B&B on Monday, April 1, Bill Spencer (Don Diamont) and Katie Logan (Heather Tom) will decide that it’s time to find out who is behind all the matchmaking efforts on their behalf. They’ve just enjoyed a romantic dinner for two served by the illustrious Chef Chambre (Tamar Braxton), and whoever arranged the dinner apparently left Bill to pick up the check.

That will lead Bill and Katie to do some thinking about who might be behind the matchmaking. They’ll probably first suspect Justin Barber (Aaron D. Spears) and Donna Logan (Jennifer Gareis), since they seem to be the most obvious suspects. But both Donna and Justin are pretty straightforward in their desire to see “Batie” together again, so it doesn’t seem to be them.

But there is someone else who Bill and Katie haven’t considered yet, and that’s their son Will Spencer (Finnegan George). According to The Bold and the Beautiful spoilers, the secret matchmaker will indeed be Will. But how long will it take Bill and Katie to figure it out? Their romantic dinner was arranged by a “Mr. William Spencer,” so it shouldn’t be too long before they realize that they’ve been set up by their own son.