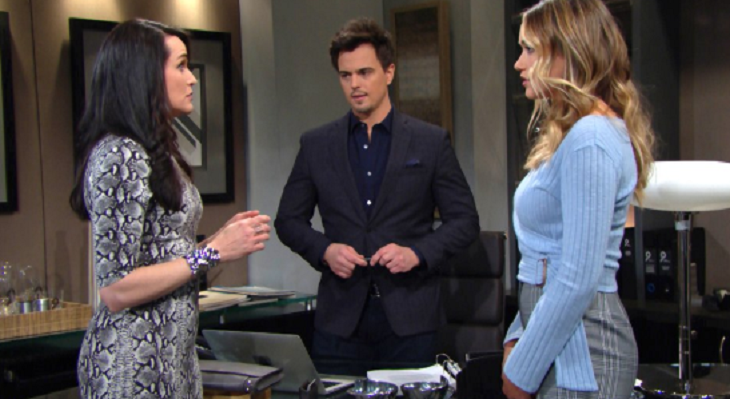 The Bold and the Beautiful (B&B) spoilers tease that Quinn Fuller (Rena Sofer) will question Shauna Fulton (Denise Richards) motives about her daughter Flo Fulton (Katrina Bowden). Quinn will wonder why she is trying to keep her father identity a secret, suggesting it may be time to tell Flo the truth. Here’s what you need to know about what’s ahead on B&B.

In an attempt to show Shauna that it may be time, to be honest about Flo’s dad, she shares her story. B&B spoilers say that Quinn will confess how she hid Wyatt Fuller’s (Darin Brooks) father’s identity for a long time. She will admit she didn’t want Bill Spencer (Don Diamont) to know her son, but she changed her mind.

In the end, Quinn will say that Wyatt deserved to know the truth and his relationship with his dad was his and it had nothing to do with her.

Shauna Will Talk To Flo

After chatting with Quinn about revealing Flo’s daddy’s identity, she opens up to her daughter. She will ask her if she wants to meet her biological father. Flo will know that her mother really doesn’t want her to meet him and she may tell her she doesn’t need to meet him.

However, the B&B spoilers tease that Flo may be connected to one of the Forrester men or even Deacon Sharpe (Sean Kanan). The writers have dropped several hints that Hope Logan (Annika Noelle) and Flo are similar in more than one way. Is that a hint that Hope and Flo will be revealed as sisters? Could Deacon be Flo father?

That definitely would be shocking. Imagine Brooke Logan’s (Katherine Kelly Lang)face if she found out that Flo is her daughter Hope’s half-sister. Whoever it is, it will be interesting. B&B has teased a Spencer, Logan, or Forrester link for the past few months.

Don’t forget to come back for more The Bold and the Beautiful (B&B) spoilers, news, and casting updates!