General Hospital Spoilers: Sonny Is Not Alexis – Kristina Underestimates How Far Dad Will Go To Save Her 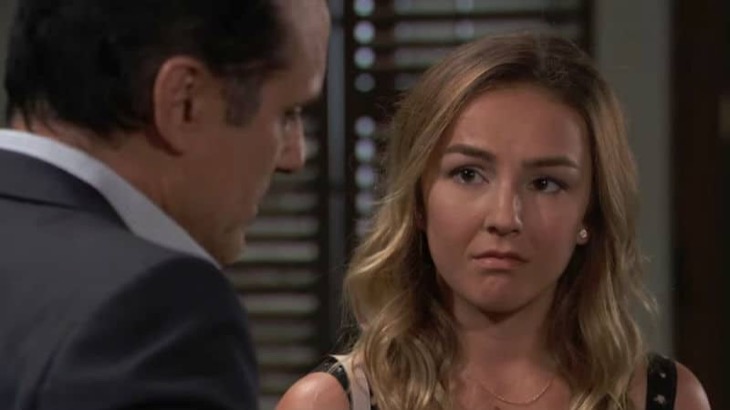 General Hospital’s Kristina Corinthos-Davis (Lexi Ainsworth) seems to think she can use her bullying and threatening techniques on Sonny Corinthos (Maurice Benard) like she does Alexis Davis (Nancy Lee Grahn), but it doesn’t work. Has Kristina forgotten who and what Sonny is?

General Hospital’s Alexis is the worst of Kristina’s parents by far. Kristina could tell Alexis anything when she was younger, and Alexis would fall for it hook, line, and sinker. Jason Morgan caught Kristina drinking, and with pot, Kristina faced no consequences. Sam McCall caught Kristina driving without a license, Alexis accused her of lying. Kristina ran Claudia off the road killing her little brother, Alexis takes the blame. Kristina has never had to answer for anything she has ever done. Alexis planned Kristina’s life from the start and refused to let her make any mistakes.

General Hospital’s Sonny Corinthos knows that Shiloh Archer is running a cult. Sonny also knows that Sam and Jason are investigating Shiloh. Sonny is furious that Kristina has been taken in by this and wants results. Sonny has no idea how bad Shiloh is, but he knows Kristina is buying everything Shiloh dishes out. Sonny is afraid of losing his daughter to this cult and will see Shiloh taken down regardless. If Sonny hears Willow’s story, Shiloh is as good as dead; there is no way Sonny will let that happen to Kristina with or without her consent.

GH Spoilers: Sonny Corinthos And Jason Morgan Have Worked With The Law

General Hospital’s Sonny and Jason occasionally work with the law to take down the bad guys. Jason helped to try and capture Franco years ago, Jason helped with the Balkin. Sonny cooperated with Margaux Dawson (Elizabeth Hendrickson) to expose her mother’s part in her father’s murder. It is not strange at all anymore for Sonny and Jason to work with the cops instead of killing their enemies. Harrison Chase has already asked Jason to work with him. Jason doesn’t want to go to prison and be separated from his kids again, so he’s not going to take a chance of being convicted of murder. Shiloh could be taken down by the cops and not killed, and Kristina still saved from herself and DOD.

General Hospital Spoilers: Sonny Corinthos Will Not Lose Another Child

General Hospital’s Sonny has already lost his son Morgan Corinthos; he is not willing to risk losing another child. Kristina needs to realize that Sonny will not sit idly by and let Shiloh continue to brainwash his daughter. Sonny loves his children and will take care of them no matter what it takes. Kristina has forgotten who and what her father is and is about to be rudely awakened if she doesn’t wake up and realize the danger she is in with DOD and none of her threats to cut Sonny out of her life will stop him from rescuing her.