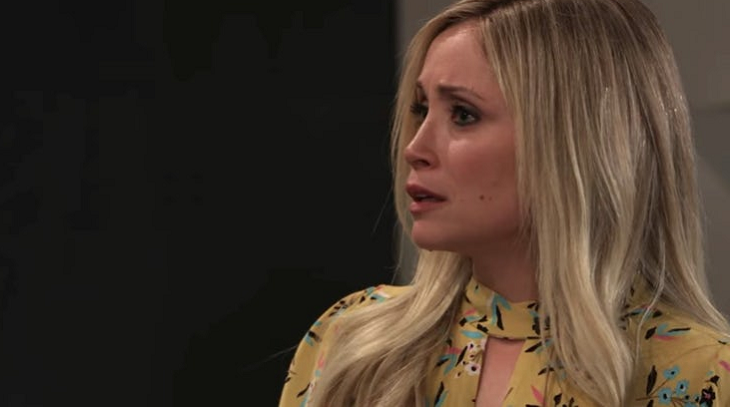 Welcome to your Monday, April 1 General Hospital recap! We begin our day at Lulus (Emme Rylan) house where Carly (Laura Wright) and Sonny (Maurice Bernard) have come by to check on Dante (Dominic Zamprogna). Lulu says, “he’s gone.” At the courthouse, Franco (Roger Howarth) confronts Kevin (Jon Lindstrom) and says he needs to regret what he did to him.

At the hospital, Laura (Genie Francis) receives the divorce papers from Alexis (Nancy Lee Grahn.) At the metro court, Nina (Michelle Stafford) asks Maxie (Kirsten Storms) and Peter (Wes Ramsey), what they’ve been up to.

At the Metro Court, Maxie says that they ran a DNA test on Nina and Sasha (Sofia Mattsson). The tests reveal that Sasha really is Nina’s daughter (though we know she’s not, someone must have switched them).

Maxie apologizes to Nina after Valentin (James Patrick Stuart) blows up at them. Nina says that she feels hurt by Maxie and can’t believe she would do this to her. Nina storms off.

How will the results of Maxie's DNA test sit with Nina and Valentin?
Tune into a dramatic, new #GH – STARTING NOW on ABC! @japastu @TheRealStafford @teenystweeting #GH55 pic.twitter.com/kOjTFYltZL

Sasha is confused about the DNA results and questions Valentin. Valentin goes after Nina where she’s upset in the Crimson office and wondering what secret Liesl is holding over him. Valentin says that Liesl knows that Nina is the one who injected the fatal dose to Cassandra.

Sonny and Carly are confused as to why Dante has left again. Lulu tells them that he felt strange and possibly violent. Lulu says Dante coming back was like waking up from a nightmare.

Rocco asks his mommy what is wrong. Lulu tells him that everything will be okay though his daddy had to leave town again. Carly walks Lulu to the kitchen and asks her what she needs while handing her a box of kleenex.

Sonny and Rocco are playing video games and Sonny asks if he misses his father. Lulu is worried that Dante may never come back, but she says will wait forever. Sonny and Carly leave as Lulu sits down on the floor and starts crying.

Franco lays into Kevin and says the only reason he treated him was to learn more about his serial killer brother. His betrayal led to Kiki’s death and he’s not sure he can forgive him for what is bastard brother did. Lucy (Lynn Herring) approaches and tells Kevin that he’s not alone.

Lucy comforts Kevin and says that she is still his friend and will never turn her back on him. Nora Buchanan (Hillary B Smith) appears and presents herself as Kevin’s lawyer. Kevin says Dr. Saybrooke (Marty reference from OLTL!) recommended her to him.

Lucy recognizes Nora as Olivia Jerome’s lawyer from a few years ago. Margeaux (Elizabeth Hendrickson) shows up and introduces herself, she asks where Nora is from. Nora says she’s from Llannview and Margeaux says she prefers Pine Valley (another AMC/OLTL) reference!

Kevin says he’s going to plead guilty and Lucy says, he can’t do that. He wants to take responsibility for his actions and all the deaths. Kevin pleads not guilty to the charges and Margeaux argues back. Lucy approaches the bench to defend Kevin and the judge allows her. Kevin is released on bail set at $150,000.

Alexis asks Laura if she’s okay and whether or not she’s having second thoughts on the divorce. Laura says she still loves Kevin but needs to understand what made him lie to her.

Liz runs after Franco trying to get him to calm down. She explains that the progress he made with Kevin was worth the time.

At the Metro Couty, Carly tells Sonny about the knife incident with Dante and that he must have PTSD. Kevin thanks Lucy for paying his bail, she says she didn’t do it. Alexis tells Laura, Liz, and Franco to meet at the hospital tomorrow to discuss Gail’s final will instructions…. flash to preview for Tuesday.