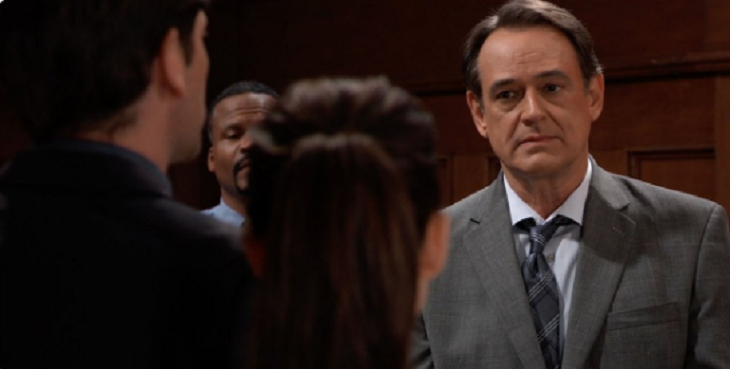 General Hospital (GH) spoilers for Tuesday, April 2 promise an episode full of memories and nostalgia as the show’s 56th anniversary is celebrated and the late Dr. Gail Adamson Baldwin’s (Susan Brown) life is celebrated as well. Gail’s bequest to General Hospital is read, and Port Charles residents go on an unusual treasure hunt per Gail’s instructions!

First, Dr. Monica Quartermaine (Leslie Charleson) welcomes Dr. Lesley Webber (Denise Alexander) back to General Hospital. Monica and Lesley were two of the first female doctors at GH, as well as on television in general. Monica welcomes Lesley back to the 21st century!

GH Spoilers– Nurses Talk About Being A Team

Two of General Hospital’s nurses are together, as Epiphany (Sonya Eddy) talks to Elizabeth Baldwin (Rebecca Herbst) and tells her they are a team! Epiphany is the head nurse, or supervisor of nurses, while Elizabeth is a regular nurse. Epiphany is talking to her but probably means the nurses and all those who work at General Hospital as all being a team!

Get ready for this year's festivities with a marathon of our newest #GH Collection – The Best of The Nurses Ball! Binge 16 episodes (from 2014 onward) for a limited time, no sign-in required. It couldn't be easier. Enjoy!
CLICK TO WATCH: https://t.co/Epq9a25ZMx #GH56 pic.twitter.com/M6uuAYbB3L

Julian Jerome (William DeVry) is confused as to why he would be invited to Gail’s celebration of life and bequest to the hospital, as he follows Alexis Davis (Nancy Lee Grahn) down a flight of stairs at GH and says he understands why this would be Alexis’ deal, since Gail put her in charge of her will, but not why he’s expected to be there!

Elsewhere in the hospital, Bobbie Spencer (Jacklyn Zeman) faces a rather angry looking Felicia Scorpio (Kristina York) and tells her she’s been expecting her. It sounds like Bobbie and Felicia have some old wounds to heal and old arguments to settle!

Meanwhile, Felicia’s husband Mac Scorpio (John J. York) is excited as he talks to Felicia’s daughter Maxie Jones (Kirsten Storms) and tells her they don’t know what they’re missing! He couldn’t be talking about Bobbie and Felicia’s little meeting, could he?!

Perhaps Laura leaves there and runs into her old friend Sonny Corinthos (Maurice Benard), as they appear to be sitting together in the GH chapel as Sonny thanks God for General Hospital!

Stay tuned to GH and keep checking General Hospital spoilers frequently for all the latest news, developments, and spoilers!