Young and the Restless Spoilers: Tuesday, April 2 – Ashley And Jack Decide To Compete – Lauren Wants Fenmore’s Back – Jett And Elena Move In To Devon’s Place 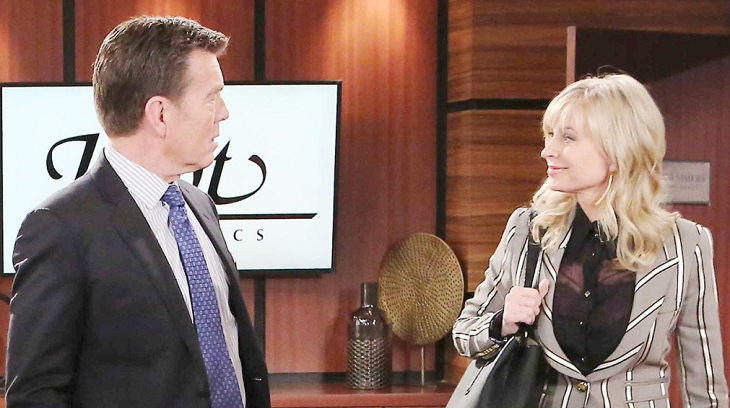 The Young and the Restless (Y&R) spoilers for Tuesday, April 2, tease that Lauren Baldwin (Tracey E. Bregman) will stop by Jack Abbott’s (Peter Bergman) office. She’ll want to buy back Jabot’s stake in Fenmore’s, but Jack will refuse because Fenmore’s is a part of his plan to revitalize Jabot. Anyway, the point will be moot as she doesn’t have the cash for the buyback.

In the foyer, Lauren and Phyllis Summers (Gina Tognoni) will chat, and Phyllis will state that she’d like to run Fenmore’s with Lauren. Later, Phyllis will pop in on Jack wanting her severance package, but he’ll refuse to pay her.

Next, on Y&R, Devon Hamilton (Bryton James) will welcome Jett Slade (Gilbert Glenn Brown) and Elena Dawson (Brytni Sarpy) to his home. After Devon leaves, Jett will play a couple of songs until he starts coughing, and then Ana (Loren Lott) will take over the singing.

RT and give a warm #YR welcome to @_Brytni who makes her debut as Elena Dawson! @CBSDaytime pic.twitter.com/bNmaOpgGV3

In her hotel room, Ashley Abbott (Eileen Davidson) will insist to Abby Newman (Melissa Ordway) that she’s taking over the family business whether Jack likes it or not. Ashley and Abby will catch up on things, and Ashley will ask Abby to be her second-in-command in Paris, but Abby will refuse since she has the new restaurant to think about.

Not everyone is happy to see Ashley back in Genoa City, but we are always thrilled to have a special appearance by @eileen_davidson on #YR! ❤️ pic.twitter.com/31p9nyJ4nG

Next, on Y&R, Devon will arrive at Rey Rosales’ (Jordi Vilasuso) apartment, where Lola Rosales (Sasha Calle) is convalescing. He’ll ask about her recovery and remark that he was surprised that it was on GC Buzz that they’re going ahead with the opening so soon. Lola will assure Devon that she won’t end up back in the hospital, but after he leaves, she’ll hold her abdomen in pain.

At Crimson Lights, Kyle Abbott (Michael Mealor) will tell Summer Abbott (Hunter King) that Phyllis was voted out at Jabot, and he’ll reveal that he was trying to oust Phyllis before Ashley returned. Phyllis will arrive, and Summer will offer her condolences about Jabot.

Then talk will turn Summer being Lola’s donor, and Phyllis will be irritated to be the last to find out about it. Summer and Phyllis will chat privately, and Phyllis will warn Summer to beware of Kyle since he’s an untrustworthy Abbott. On the patio, Kyle will run into Lola, then Summer will spot the two together and will run to ask Kyle to take her home.

Young And The Restless Spoilers– Phyllis Has A Plan With Lauren

Finally, on the new episode of Y&R, back at Devon’s place, Ana and Elena will chat and the topic of money will come up. Elena will again state that she’s not looking for any handouts. Later, Devon will come home to find Elena drinking out of Hilary Hamilton’s (Mishael Morgan) mug. He’ll be startled but won’t say anything.