Days Of Our Lives Spoilers: Kate Has A Business Proposition For Victor– Will She Return To Titan? 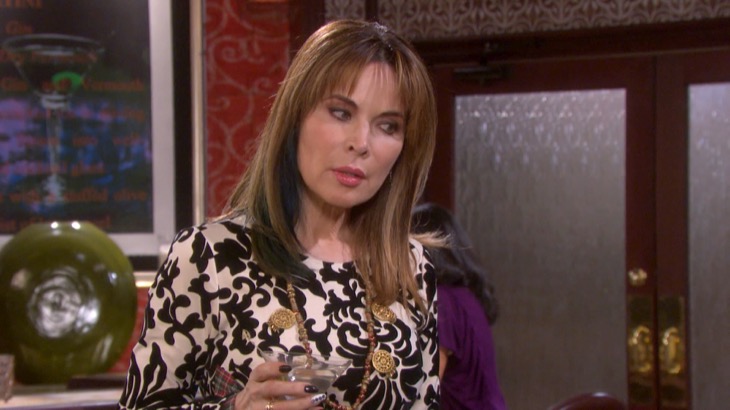 Days of Our Lives (DOOL) spoilers tease that Kate Roberts (Lauren Koslow) has a business proposition for Victor Kiriakis (John Aniston) this week. She is interested in returning to Titan and talks to him about the possibility of working for him again.

Kate has quite the resume, having been an anesthesiologist at Salem University Hospital in the late seventies, an unwilling call girl forced into “the life” by Stefano DiMera (Joseph Mascolo), then returning to Salem in the nineties to work at Victor’s Titan Publishing Company.

Previously on #DAYS, Victor reveals the truth about Leo to Marlena. https://t.co/ZsCmioRrzb pic.twitter.com/Ia6fB6Anry

Longtime Days of Our Lives viewers will recall that at that time Victor wasn’t the most ethical person himself, even having been described as a crime lord, and he and Kate marry for a period of time but it fell apart after only a year.

In the 2000s, she started her own business, “Kate’s Hearth and Home” with the help and financing of Stefano, and later lost her business to Stefano! After that, she returned the favor by taking over parts of DiMera Industries, but that ended with the murder of Vivian Alamain (Louise Sorel) in mid-2018, and when she was fired by Stefan DiMera (Tyler Christopher).

Later, her husband Andre DiMera (Thaao Penghlis) was accidentally killed by Abigail DiMera (at that time Marci Miller). So, Kate’s been out of work for nearly a year and is probably not only getting bored but getting broke as well!

Days Spoilers– Will Victor Agree To Work With Kate?

Now that loose lips Leo Starke (Greg Rikaart) is no longer in Salem, and not living in the Kiriakis mansion, and Sonny Kiriakis (Freddie Smith) has his signed annulment papers, it may be a little easier for Kate to convince Victor to hire her; after all, now all the damage she did when she encouraged Leo to continue the takedown of Titan after Vivian’s death, who originally hired him, is over.

Will Victor overlook that and consider her for a position, or to possibly work in a management position in Titan? Time will tell; stay tuned to Days of Our Lives and keep checking DOOL spoilers frequently to see all the latest news and spoilers!