The Bold and the Beautiful Recap, Tuesday, April 2: Bill And Katie Talk About The Future– Ridge Gives Thomas A Warning 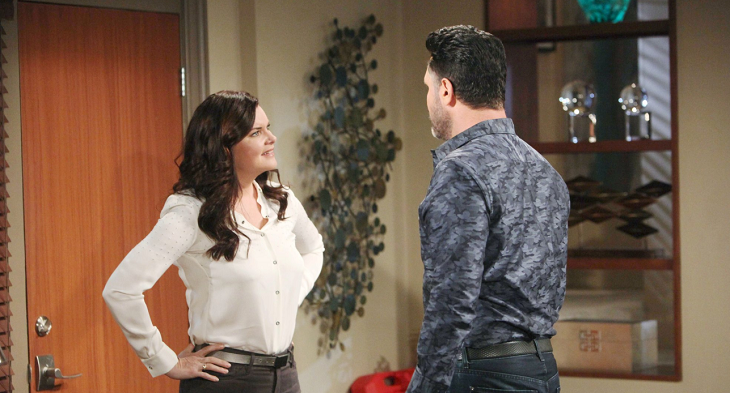 The Bold and the Beautiful (B&B) recap for Tuesday, April 2 finds that it was actually Bill Spencer (Don Diamont) and Katie Logan’s (Heather Tom) little boy who tried to set his two parents up together. Also, Ridge Forrester (Thorsten Kaye) gives Thomas Forrester (Matthew Atkinson) a warning about spending too much time with Hope Logan (Annika Noelle).

It begins at Katie’s house, where Will asks his parents if they are upset at him for the credit card fraud. Bill explains that he’s not upset at all, but rather quite impressed at the little boy and his determination to set his parents up on a date.

Katie says that the young boy must have picked up on a few things from his father. A little later on a package arrives from William Spencer. Clearly, the little boy used his father’s credit card to buy cookies in the form of dollar signs. All three of them laugh, hug, and cuddle on the couch as a family. Will is over the moon to see his parents so happy.

Katie and Bill find the humor in the situation when their "Cupid" is revealed. WATCH FULL EPISODE: https://t.co/01z2qzA1tY #BoldandBeautiful pic.twitter.com/VWAFtkop6d

Over at Hope’s cabin, Douglas (Henry Joseph Samiri) tells her that he doesn’t want to leave, but Thomas says it’s time to go to bed. However, Hope says that he can come back anytime to watch a movie with her.

Ridge finds Brooke (Katherine Kelly Lang) fuming over the recent turn of events. She can’t stop thinking about Taylor (Hunter Tyler) and her devious plan to not only break up Hope and Liam (Scott Clifton) but her and Ridge as well.

Thomas then stops by and thanks Ridge for allowing him and Douglas to stay with them as they continue to mourn the loss of Caroline Spencer (Linsey Godfrey). Thomas also mentions that Hope has been a huge help. While Ridge does agree, he reminds Thomas that he should be more focused on his son, and not another woman right now. He also reminds Thomas that Hope is married to Liam.

Back at the cabin, Brooke and Hope talk about Douglas. Hope tells her mother about how Douglas asked her to be his new mommy.

Concerned, Brooke says that while it’s great that she’s there for Thomas and Douglas, she can’t forget about Liam. Hope says that she wants to help Douglas, but Brooke reiterates that she needs to take care of herself first.