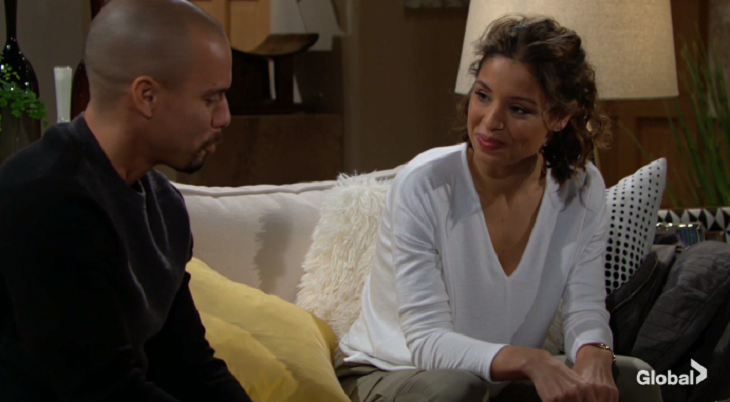 The Young and the Restless (Y&R) spoilers for Wednesday, April 3, tease that Billy Abbott (Jason Thompson) will chat with Jack Abbott (Peter Bergman) at the Abbott estate. He’ll be worried about Victoria Newman (Amelia Heinle) as she ignores his texts. The men will discuss Jabot and the rebuilding process, and they’ll note that they need a plan and fast.

Upstairs, Summer Abbott (Hunter King) and Kyle Abbott (Michael Mealor) will make love, but afterwards, Kyle will look longingly at a photo of Lola on his phone, then leave. Summer will then pick up his phone and see Lola’s photo.

Back downstairs, Kyle will join Billy and Jack, and the three will discuss Jabot. Summer will appear and join the conversation. She’ll bring some new ideas to the table as she and Kyle brainstorm, and everyone will be impressed by her contributions.

Next on Y&R, at Devon Hamilton’s (Bryton James) place, he and Elena Dawson (Brytni Sarpy) will start to bond. They’ll discuss Hilary Hamilton (Mishael Morgan) and Elena will say that she recognizes her from GC Buzz, and that it broke her heart when Hilary passed away.

During their conversation, Elena will mention that she doesn’t get out much, so Devon will suggest that they do something together. After some awkward moments, they’ll agree to go for coffee together.

At Crimson Lights, Mariah Copeland (Camryn Grimes) will surprise Tessa Porter (Cait Fairbanks) with a gift – she’s retrieved Tessa’s guitar from the pawn shop. Tessa will be overjoyed and decide that she needs to reconnect with her music in private. She’ll kiss Mariah and thank her for believing in her.

Young And The Restless Spoilers– Rey And Sharon Make Love

Next, on Y&R, Rey Rosales (Jordi Vilasuso) will arrive at Sharon Newman’s (Sharon Case) house for dinner. Mariah will arrive and crash their dinner. During the evening Mariah will inquire about Rey’s marriage to Mia Rosales (Noemi Gonzalez).

Rey will say that the marriage is only on paper and that the intends to make Sharon very happy. After Mariah leaves, Rey and Sharon will make love.

In Las Vegas, Brandon Rose (Mitch Eakins) will knock on Victoria’s hotel room looking for “Lizzie.” She’ll tell him he has the wrong room, but he’ll slip a flyer for his band under the door and says he’ll leave a VIP pass for her at the box office.

Later, unable to sleep, she’ll head downstairs, and before long the band will be in her room. She’ll pose for a group selfie and introduce herself as “Jani,” but Brandon won’t be fooled and will call her Victoria.

As the party in Victoria’s room winds down, Brandon will suggest they go out, but she’ll refuse. So, he’ll write his phone number on her hand, and she’ll later transfer it to her phone.

At Tessa and Mariah’s apartment, Tessa will have difficulty as she tries to play a song, and she’ll sadly put down her guitar. But Mariah will appear and suggest that Tessa play one of her older songs – it works!

Finally, on Wednesday’s episode of Y&R, Summer will notice Victoria’s selfie on social media, and she’ll announce that Victoria’s hanging out in Las Vegas with a band called the Bloody Thorns. Billy will be shocked.