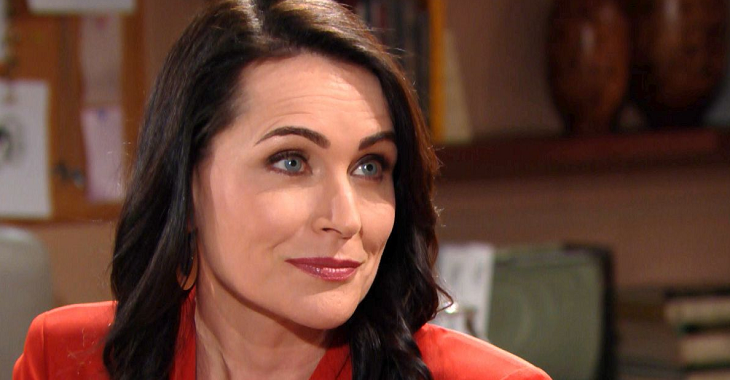 The Bold and the Beautiful (B&B) recap for Wednesday, April 3 finds Brooke Forrester (Katherine Kelly Lang) giving Liam Spencer (Scott Clifton) a much-needed heads up about Taylor Hayes (Hunter Tylo) and her plans. Also, Sally Spectra (Courtney Hope) confronts Quinn Forrester (Rena Sofer) about making her feel like a third wheel in her relationship to Wyatt Spencer (Darin Brooks). Also, Wyatt will reach out to Flo Fulton (Katrina Bowden) with an offer she feels hesitant about.

At Forrester Creations, Ridge Forrester (Thorsten Kaye) tells Sally not to worry about her deal with the company. He also assures her that she’s making the right decision. Quinn doesn’t seem so positive though and makes a snarky comment about Ridge acting as Sally’s agent. A little later, Quinn can’t stop gushing about Flo to Wyatt. She also regrets losing touch with Flo’s mother, Shauna Fulton (Denise Richards).

B&B Spoilers– Zoe Wants Hope To Have Another Baby

In the design office, Zoe Buckingham (Kiara Barnes) wonders if Liam and Hope Logan (Annika Noelle) will try for another baby. Hope doesn’t answer. Sensing the awkwardness, Zoe tells her that she was meant to be a mother.

Sally confronts Quinn in the design office. She flat out asks her why she’s been so rude to her lately. Sensing that Quinn is keeping her real feelings to herself, Sally tells her that she and Wyatt are happily in love. Quinn, however, thinks that Wyatt is a free spirit. Sally replies that all Wyatt wants is to be her boyfriend. Quinn doesn’t seem to believe this and smirks in response.

Bold And The Beautiful Spoilers– Liam Encourage Hope To Adopt

At the cabin, Liam tells Brooke that Hope has been spending a lot of time with Douglas (Henry Joseph Samiri) lately. Brooke doesn’t waste any time in telling him that Taylor has a plan to break Liam and Hope’s marriage.

She thinks that Liam would be better suited with Steffy Forrester (Jacqueline MacInnes Wood) and their two daughters, while Hope should be with Thomas (Matthew Atkinson) and Douglas. Hope arrives and tells Liam about her conversation with Zoe. She then thinks that she would be better off being a mother to someone else’s child. She doesn’t want to get pregnant again. Liam hugs her and tells her that there’s a child out there for her.