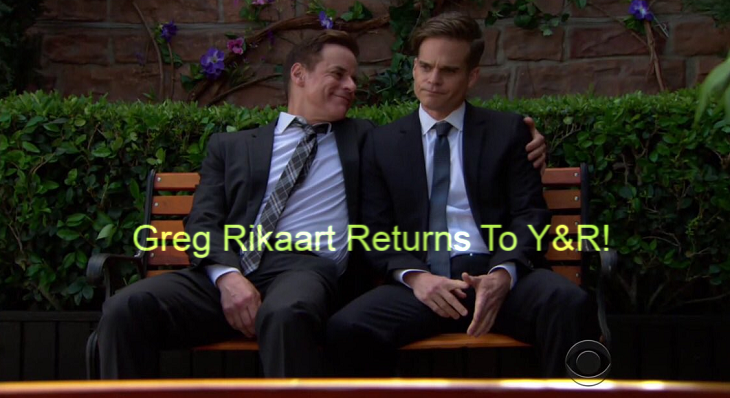 The Young and the Restless (Y&R) spoilers tease a major casting scoop. Greg Rikaart will return to play Kevin Fisher. The actor just wrapped up his arc on Days of Our Lives (DOOL) as Leo Starke and he is not expected to return to the NBC soap opera. Here’s what you need to know about what’s ahead on Y&R.

Y&R Spoilers– Kevin’s Checks Back In

It’s been quite a while since Kevin has been seen in Genoa City. Since he was taken off contract, he has popped in several times. The Y&R fans miss him greatly and they have called for his return over and over. It looks like it worked because he’s back.

There is so much they can do with his storyline. With Adam Newman (Mark Grossman) returning, they could have it come out that Chloe Mitchell (Elizabeth Hendrickson) tried to kill Adam by blowing up the cabin with him inside.

Then, there’s the little detail that he and Victor Newman (Eric Braeden) helped Chloe fake her death and escape GC.

With Paul Williams (Doug Davidson) back on the canvas, it seemed like a matter of time before they brought the whole Baldwin-Fisher family back.

The Young And The Restless Spoilers — Will Gloria Return Next?

Judith Chapman just wrapped up her arc on Days Of Our Lives as Diana Cooper. She is free to hop back over to Y&R if they need her. And, hey CBS, we do need her.

She posted on social media that the fans should give up hope that Gloria Bardwell will show up in Genoa City. It certainly sounded like a clue that she was on her way back to her home soap.

According to Soap Opera Digest, they learned about Greg’s Y&R return but CBS is keeping details about his return a secret. No one knows what his storyline will be or any other details.

Are you happy that Greg Rikaart is coming back to Y&R? Don’t forget to come back later for more The Young and the Restless (Y&R) spoilers, news, and casting updates!