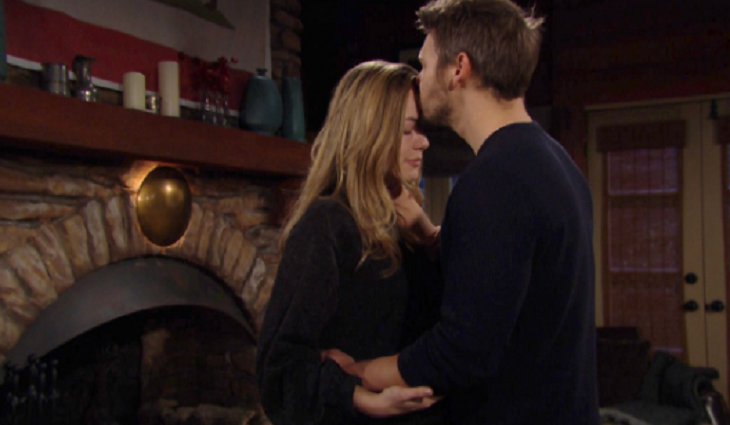 Hope (Annika Noelle) truly believes that Liam (Scott Clifton) should be with Steffy (Jacqueline MacInnes Wood) on The Bold and the Beautiful. That’s a turnabout from last summer, as B&B fans know. Now, the Thomas (Matthew Atkinson) recast appears to be creating momentum for ‘Lope’ to end.

A somewhat SORAS’d Douglas (Henry Joseph Samiri) serves as one plot vehicle that is already enabling Hope’s focus to shift. The warm-hearted scenes, where Douglas and Hope are bonding over the loss of loved ones, is also furthering an opportunity for Thomas to become an option.

B&B Spoilers– Liam Needs To Step Up His Game

It’s fair to suggest that Liam isn’t the most romantically aware individual. Devoted fans recall the Sally’s (Courtney Hope) interest in him a while back, the Steffy-Bill (Don Diamont) debacle, among other storyline points that could be mentioned.

As of early spring 2019, Liam is aware of his wife’s selfless pleas for him to be with Steffy for the sake of her daughters. At the same time, he doesn’t see the inherent danger of Thomas being part of the newly formed Douglas link.

Hope is encouraging Liam to spend more time with his daughter, Kelly (Zoe Pennington) and Phoebe, who they don’t know is actually Beth. Despite Liam’s rejection of this suggestion, Hope remains opposed to even considering trying to become a mother again. That makes total sense, due to the perceived death of Beth.

Until the Reese (Wayne Brady) reveal takes place, surely also involving Flo (Katrina Bowden), Steffy will continue believing that Phoebe is her adopted child. With the ruse in place, Liam will certainly be spending plenty of time with Steffy and the girls, thereby weakening ‘Lope’, while also providing an impetus for ‘Steam’ to revisit its better days.

Meanwhile, Thomas has been open about not having had a traditional relationship with Caroline (Linsey Godfrey), but them being good parents to Douglas. The character Atkinson now plays also has a known history with Hope and is already being influenced by the deepening interplay between Douglas and Noelle’s alter ego.

The Bold And The Beautiful Spoilers: Hope’s Bond With Douglas Will Lead To A Relationship With Thomas –Lope In Trouble

Fans of The Bold and the Beautiful rightfully express their opinions on a regular basis. So, will Hope turn to Thomas, thereby ending ‘Lope’? Please vote in our poll below!