The Bold and the Beautiful Recap Thursday, April 4: Shauna Wants Flo To Stop Searching For Her Father–Hope Grows Closer To Thomas 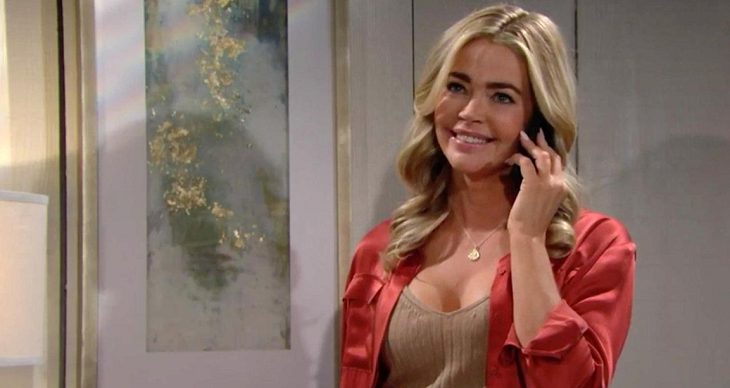 At Brooke Logan’s (Katherine Kelly Lang) house she once again complains to Ridge Forrester (Thorsten Kaye) about Taylor Hayes (Hunter Tylo) and her constant meddling. Ridge defends Taylor and says that she’s simply worried about her grandson, Douglas Forrester (Henry Joseph Samiri). Brooke doesn’t look convinced. She thinks that Taylor is on to something. Thomas then appears and says he’s thankful for all Hope has done for him and Douglas these last few weeks.

B&B Spoilers– Thomas Thanks Hope For Her Help

At the cabin, Hope is wondering how Steffy Forrester (Jacqueline MacInnes Wood) is doing with the girls in Paris. Douglas then appears and says that he’s not feeling well and that he misses his mother. Hope explains that she completely understands what he is going through.

Thomas then shows up and credits Hope for his son’s happiness. He also admits that both he and Douglas need her now more than anything else. He also wants to repay her for everything she’s done so far.

Bold And The Beautiful Spoilers– Eric Questions Quinn About Sally

At Forrester Creations, Sally is suspicious over Quinn and her intentions. She feels a though she wants to break her up with Wyatt Spencer (Darin Brooks), so he and Flo can get back together again. Eric Forrester (John McCook) enters the room and finds the two women talking about Wyatt. He says that he’s going to miss seeing him at the world.

He also says that he’s thankful that Sally decided to stay at Forrester Creations. Once Sally leaves, Eric questions Quinn about all of the tension between her and Sally. Quinn says rather reluctantly that she likes Sally, but will never forget how she stole another designer’s work.

At the Bikini Bar, Flo thinks about what Wyatt said about finding her real father. Back at her apartment, Flo calls her mother Shauna. She updates her on everything that has happened so far in Los Angeles. She asks her mother about her biological father.

Shauna warns her that she shouldn’t think about searching for her father and that he has no place in their lives right now. However, Wyatt convinces Flo that it’s time she finds out the truth for herself.