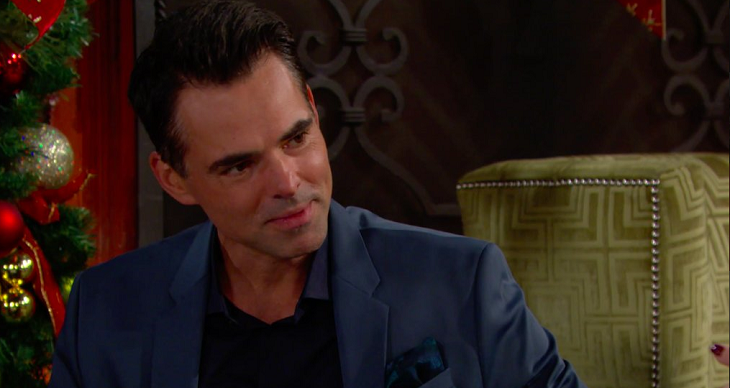 The Young and the Restless (Y&R) spoilers for Friday, April 5, tease that Cane Ashby (Daniel Goddard) will chat with Traci Abbott (Beth Maitland) over coffee at his house. Traci will want to know why Cane was upset with Billy Abbott (Jason Thompson) earlier, and Cane will fill Traci in on how Billy flew to the prison to tell Lily Ashby (Christel Khalil) about his kiss with Victoria Newman (Amelia Heinle).

Cane and Traci will have a deep discussion about Cane’s relationship with Lily, and she’ll point out that perhaps things changed for each of them and she’ll question exactly what he’s fighting so hard for. Later, Cane will tell the twins that Lily is being released early, but that the divorce is still on and Lily will not be returning to Genoa City.

Next on Y&R, at the Abbott estate, Billy will finally reach Victoria. She will say that she was on a “phone cleanse” and needed time to herself. Billy will let her know that he knows that she was partying with a band in Las Vegas, and she’ll get annoyed that Billy is keeping tabs on her.

It won’t be long before Brandon Rose (Mitch Eakins) knocks on Victoria’s door. He’ll give her VIP tickets to his band’s next show and ask if the trial is the reason she’s in Las Vegas. Brandon will say that he recently saw her father at a high-stakes poker game, but he was talking to someone rather than gambling.

Victoria will be confused, but she’ll quickly brush off Brandon’s statement. Brandon will say that he owns a tech start-up, and they’ll discuss business and art. Before long, they’ll be kissing and undressing, and making love.

Young And The Restless Spoilers– Rebekah And Nick Reconnect

Next on Y&R, Phyllis Summers (Gina Tognoni) will chat with Michael Baldwin (Christian LeBlanc) at the GCAC about Jabot and Fenmore’s, when she spots Nick Newman (Joshua Morrow) at the bar with Rebekah Barlow (Jennifer Taylor). Michael will suggest that Phyllis avoid them, and Phyllis will agree, but then go directly to Rebekah to say hello. Afterward, Nick and Rebekah will decide to leave.

Meanwhile, Phyllis will arrive at the Abbott estate to see Summer Abbott (Hunter King) and she’ll encounter Jack Abbott (Peter Bergman) and Billy. She’ll banter a bit with Billy and later learn from Jack that Rebekah is consulting for Jabot, which won’t make her happy. Ultimately, Phyllis will ask Jack to let Fenmore’s go so she can run it with Lauren Baldwin (Tracey E. Bregman), but Jack will refuse.

Over at Nick’s house, he and Rebekah will banter a bit, and they’ll kiss. Soon, they’ll be in the bedroom making love, and afterward, Nick will invite Rebekah to stay the night, but she’ll refuse. Nick will end up watching TV alone.

Back at Cane’s place, Michael will arrive so that Cane can sign the divorce papers. Cane won’t be able to bring himself to sign them and he’ll vow to fight for both himself and Lily.

Finally, on Friday’s new episode of Y&R, Victoria will wake up alone in her hotel room. But she’ll find that Brandon has left a note stating that she should let her wild side out more often. Suddenly, there will be a knock at the door, and she’ll open the door thinking it’s Brandon, but it will be Billy.