The Bold and the Beautiful Recap For Friday, April 5: Bill And Will Chat About Katie–Shauna’s Stunned That Bill Is Wyatt’s Dad–Flo Makes A Move 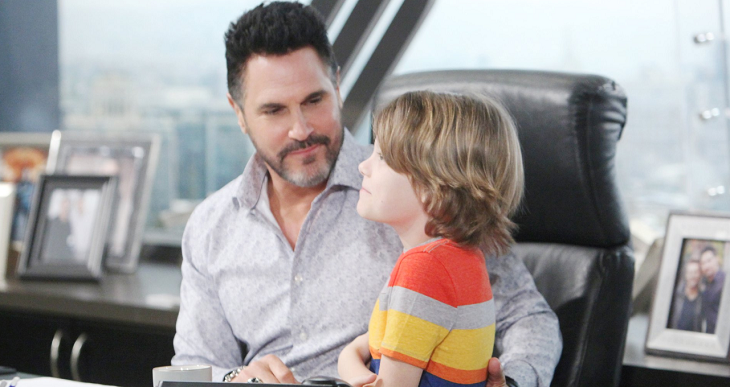 The Bold and the Beautiful (B&B) recap for Friday, April 5 find Bill Spencer (Don Diamont) and Katie Logan (Heather Tom) telling their son not to be too optimistic about the future. Flo Fulton (Katrina Bowden) grows closer to Wyatt Spencer (Darin Brooks) by the way while Eric Forrester (John McCook) get to meet Shauna Fulton (Denise Richards). Here what happened on Friday’s show.

B&B Spoilers– Will And Bill make A Bet

It begins at Spencer Publications when Justin Barber (Aaron D. Spears) discusses the situation between Bill and Katie before they talk business. Katie and Will arrive, interrupting their conversation. Will is elated to see both of his parents so happy together. He also tells them how much they love them.

After everyone leaves, Bill takes his son to the side and tells him that while he loves seeing him happy, he doesn’t want to get his son’s hopes too high, especially since they don’t know what the future holds. Little Will bets his father that if he and Katie don’t get back together, he’ll give him $500. But the young boy says he knows he doesn’t have to.

Bold And The Beautiful Spoilers– Quinn And Shauna Catch Up

At Forrester Creations, Quinn Forrester (Rena Sofer) tells Eric all about her old friend from Las Vegas, Shauna. The single mom then arrives, with both Quinn and Shauna talking about their old lives as single moms. Quinn mentions that Wyatt always told her that he and Flo would marry each other one day.

Quinn also adds that she made a huge mistake by taking Wyatt and leaving when the two of them were getting ready to build their future together. She then says that Wyatt found his father – Bill Spencer. Shauna is in disbelief.

Flo’s mother then adds that it would be best if they didn’t talk about her daughter’s father. She doesn’t want to reopen that chapter in her life but is still stunned to find out that Bill is Wyatt’s dad.

At Flo’s apartment, Wyatt stops by. He can’t help but wonder if she got the results from her DNA kit. They talk about Wyatt’s father and he mentions that he’s happy he knows the truth.

While Flo admits that she has her reservations, she tells Wyatt that she’s happy that he’s helping her investigate the identity of her biological father. They share a moment with the two of them looking into each other’s eyes.