The Bold and the Beautiful Spoilers: Monday, April 8 – Flo Could Be Bill’s Daughter – Wyatt’s Shocked By Flo’s Kiss 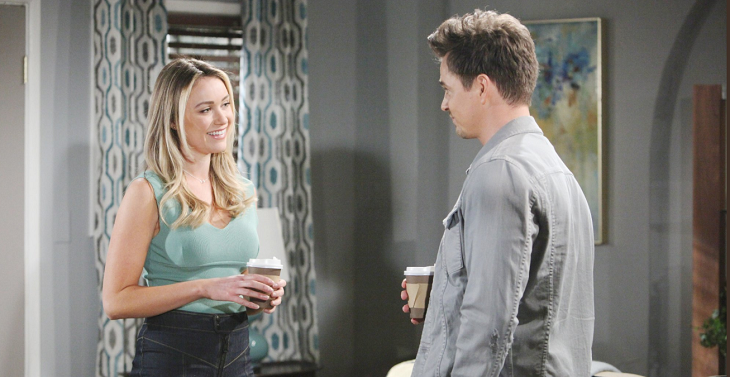 The Bold and the Beautiful (B&B) spoilers for Monday, April 8, tease that Shauna Fulton (Denise Richards) will have some heavy information to lay on Quinn Forrester (Rena Sofer). After spending some quality time with Quinn reminiscing about the past, Shauna learned that Bill Spencer (Don Diamont) is Wyatt Spencer’s (Darin Brooks) father. She was absolutely stunned by this revelation, and it’s clearly got her worried.

According to B&B spoilers, Quinn will be equally stunned to learn from Shauna that Shauna is quite familiar with Bill and that there’s a chance that Bill is Florence “Flo” Fulton’s (Katrina Bowden) father. The two women will be shocked to learn that they each slept with Bill at around the same time back in the day, and they’ll be horrified by the idea that high school sweethearts Flo and Wyatt could actually be half-siblings.

And if all that wasn’t enough, at about this time, Bill will arrive at Forrester Creations to speak to Quinn about a matter involving Wyatt. He’ll end up finding Quinn and Shauna together, and he won’t recognize Shauna.

But according to B&B spoilers, after a bit of reminding by Shauna, Bill will start to remember their one-night stand way back when. And of course, Quinn will be right there to watch all this go down while she wonders whether Flo really could be Bill’s daughter.

Meanwhile, on the new episode of B&B on Monday, April 8, Flo will be feeling grateful toward Wyatt. The two will continue their discussion about Flo wanting to find out her father’s identity, and Flo will express her gratitude toward Wyatt for all of his support. Wyatt has really reached out to her as a friend, and Flo is appreciative.

Of course, Wyatt was the one who gave Flo the DNA test kit, so that she could submit her DNA profile to a national database. They’re both hoping that this will soon reveal the identity of Flo’s father. And as they discuss the matter, Flo will be overcome with emotion.

According to B&B spoilers, Flo will also cross a big line with Wyatt when she plants a big kiss on him! This will be the second time that Flo has kissed Wyatt, although the first time she didn’t yet know that Wyatt had a girlfriend. But this time, she’s well-aware of Sally Spectra’s (Courtney Hope) presence in Wyatt’s life, so the kiss will be pretty inappropriate.

B&B spoilers say that Wyatt will be stunned by the kiss, and since he’s a stand-up guy, he’ll likely shut down the whole scene pretty quickly. Look for Wyatt to remind Flo about his strong relationship with Sally and set some much-needed boundaries with Flo.