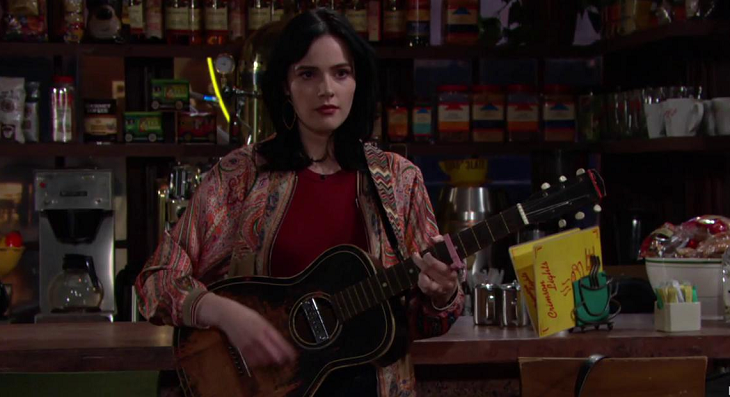 The Young and the Restless (Y&R) spoilers for Monday, April 8, tease that Victoria Newman (Amelia Heinle) will be upset to see Billy Abbott (Jason Thompson) at her hotel room door. They’ll argue and Billy will want to know who she thought was going to be at the door instead.

Victoria will ask him to be gone by the time she gets done showering, and after she leaves, Billy will see the note from Brandon Rose (Mitch Eakins).

After Victoria’s shower, she and Billy will argue about her fling with Brandon. Billy will want to know why she keeps running from him, and she’ll proceed to let him have it. But Billy will argue with her, insisting that the two of them are “endgame.” They’ll end up kissing until Brandon gets in touch to say there’s a big poker game tomorrow night and will her father be there. Victoria will tell Billy that there’s something going on with her father.

Next on Y&R, at Rey Rosales’ (Jordi Vilasuso) apartment, Sharon Newman (Sharon Case) will appear and hold up the ultrasound picture, wondering when he was going to tell her about the baby. They’ll discuss, and Sharon will deduce that the baby could belong to Arturo Rosales (Jason Canela), but she’ll still be upset that Rey didn’t tell her.

Rey will insist that he will take care of the baby if it is his, but not alongside Mia Rosales (Noemi Gonzalez). Sharon will leave to go talk to Mia.

Young And The Restless Spoilers– Tessa Gets A Music Contract

Meanwhile, at Tessa Porter (Cait Fairbanks) and Mariah Copeland’s (Camryn Grimes) apartment, Tessa will inform Mariah that she’s created a new song. Mariah will listen to it, then decide to call Devon Hamilton (Bryton James) so he can have a listen.

He’ll like the song but won’t trust Tessa. Ultimately, Mariah will talk Devon into considering her song.

Next on Y&R, at the GCAC, Mia will be with the pregnant woman from the hospital when Sharon calls her for a meeting. The two women will meet at Crimson Lights and they’ll argue back and forth about Rey, and Mia will note that she’s giving him a baby, which is something he’s always wanted. But Sharon won’t be intimidated and the two will continue to argue until Mia gets a pain.

Sharon will call Rey and insist on taking Mia to the hospital.

At Devon’s place, he’ll discuss Tessa’s song with Ana Hamilton (Loren Lott), who will be happy with the idea of hearing it.

Once Rey steps out, Mia will tell the doctor that she wasn’t sure she was pregnant, and the doctor will confirm that she is about 12 weeks along and the baby is in good health. Outside the room, Rey will tell Sharon that the baby is family, and the only question now is whether he or Arturo is the father. Sharon will vow to stand by Rey and they’ll embrace as Mia watches from inside her exam room.

Finally, on Monday’s episode of Y&R, Tessa and Mariah will chat at Crimson Lights. Tessa will be discouraged that Devon is handing her off to Ana rather than being there himself. Ana will arrive, and Tessa will start playing her song.