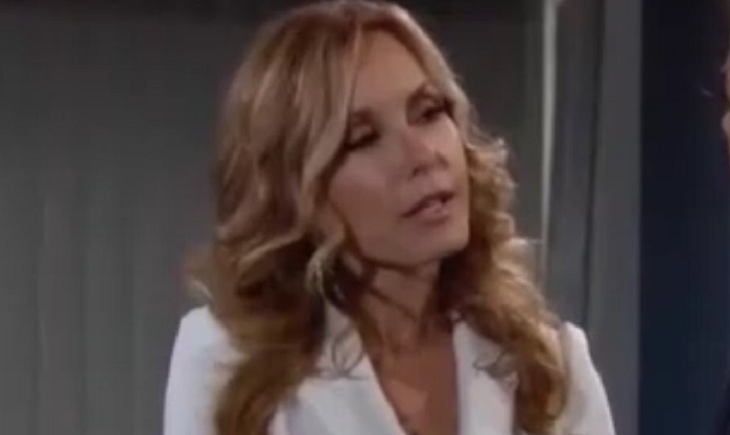 The Young and the Restless (Y&R) spoilers tease Phyllis Abbott (Gina Tognoni) and Lauren Fenmore (Tracey E Bregman) will be scrambling as they work to figure out a plan to get control of Fenmore’s.

It will be a battle because Jack Abbott (Peter Bergman) does not want to let it go as he wants to use it as part of the new Jabot. Here’s what we know about what’s ahead on Y&R.

Phyllis was hoping that she could find the money to buy Fenmore’s back from Jabot. She wanted to be able to help Lauren and gain her trust. However, she has trouble getting together that kind of cash. She goes to Jack hoping he’d give her a severance package, but he refuses.

Y&R spoilers say that Phyllis accepts defeat and meets with Lauren about what they should do next. Lauren isn’t sure but she knows staying with Jabot is not an option.

Young And The Restless Spoilers–Lauren Scrambles

The Young and the Restless spoilers tease that Lauren asks Michael Baldwin (Christian LeBlanc) to look over her contract with Jabot to see if there is any way she can get out of the deal. Michael looks over it and gives her the bad news—the contract is solid.

It was not what Lauren wanted to hear. She wanted to be able to walk away with control over Fenmore’s. Michael advised her to stay until her contract is up and then find a way to walk away after. Lauren is not ready to accept defeat and scrambles for a way out.

Y&R Spoilers–Jack Has The Upper Hand

It’s clear that Jack has the upper hand. Lauren and Phyllis cannot come up with the money they need to buy the company back. So, unless a miracle happens, Lauren will have to wait it out. Of course, we all know she is prepared to play dirty with the hope that she will get control of her father’s company.

Do you think Lauren will get control of Fenmore’s? Will Phyllis help her? Don’t forget to come back later for more The Young and the Restless (Y&R) spoilers, news, and casting updates!