General Hospital Spoilers: Chase Gives Shiloh A Stern Warning –Stay Away From Willow Or Else! 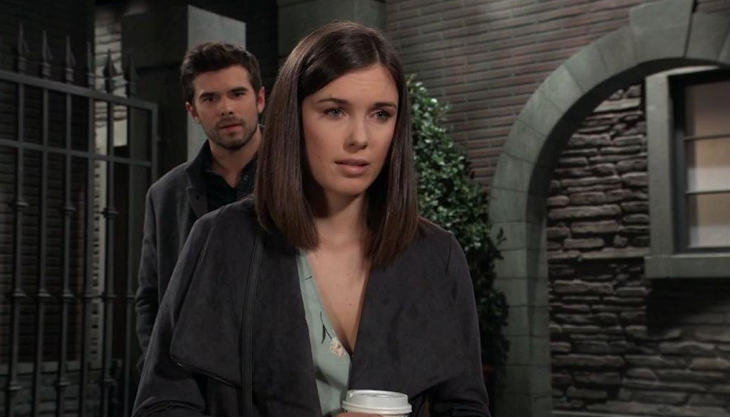 General Hospital (GH) spoilers tease that Detective Harrison Chase (Josh Swickard) will put Shiloh Archer (Coby Ryan McLaughlin) on notice that he had better stay away from Willow Tait (Katelyn MacMullen)! Shiloh has turned up where he’s not wanted, in Willow’s classroom twice recently now, and Chase will let him know that he – and the police – “have his number”, as the saying goes!

Even if the Port Charles Police Department doesn’t have an active investigation open, Chase himself does, and he will want Shiloh to know that whatever he turns up as evidence of any wrong doing will be turned in to his boss, Commissioner Jordan Ashford (Briana Nicole Henry)!

Sure, Chase is partially bluffing, since there is no formal investigation, but he figures maybe he can put a little fear of “Big John Law” into Shiloh.

Of course, one thing Chase doesn’t know, that General Hospital viewers do, is that the District Attorney is taking Dawn of Day classes, and Margaux Dawson (Elizabeth Hendrickson) can shut down any lawsuit or police investigation that she finds unnecessary or frivolous, and therefore having her as a student and disciple gives Shiloh a big ace in the hole!

Chase puts his workout on hold for a little brotherly bonding. What do he and Finn have to talk about?
An exciting, all-new #GH starts RIGHT NOW on ABC! @josh_swickard pic.twitter.com/zVmOhFrwuJ

Once he gets Margaux indoctrinated enough, she will shut down any investigation that may be attempted against either him personally or against Dawn of Day! However, that fact may be divulged by Sam McCall (Kelly Monaco) if she mentions to Jason Morgan (Steve Burton) that she saw Margaux coming in for training as she was coming out. Jason will tell Sonny Corinthos (Maurice Benard) who might tell Michael Corinthos (Chad Duell) who might tell Chase!

If Chase finds out through the grapevine that Margaux is in the cult, even if she’s only in the lower level as a beginner, he will let his boss Jordan in on Margaux’s secret, since Margaux being in the cult could easily influence which cases the police are allowed to investigate.

When police need warrants, for instance, many times the DA has to approve and issue them, as well as approve which investigations and cases stay open, which are pursued, and which are shut down!

Jordan mentioned this in relation to the Ryan Chamberlain (Jon Lindstrom) case to Mayor Laura Webber (Genie Francis) in Friday’s show, that if Margaux went with the Royal Canadian Mounted Police’s opinion, that Ryan was dead, or if forensic tests on his right hand which they found showed it was separated post-mortem or the tests as to when the hand was cut off were inconclusive.  Margaux could shut down any further police activity in relation to Ryan Chamberlain, and close the case.

General Hospital Spoilers: How Was Shiloh Able To Hypnotize Sam?

This shows that the DA has to approve any new investigations as well. Stay tuned to General Hospital, and keep checking General Hospital spoilers frequently to see the latest news, updates, and developments!