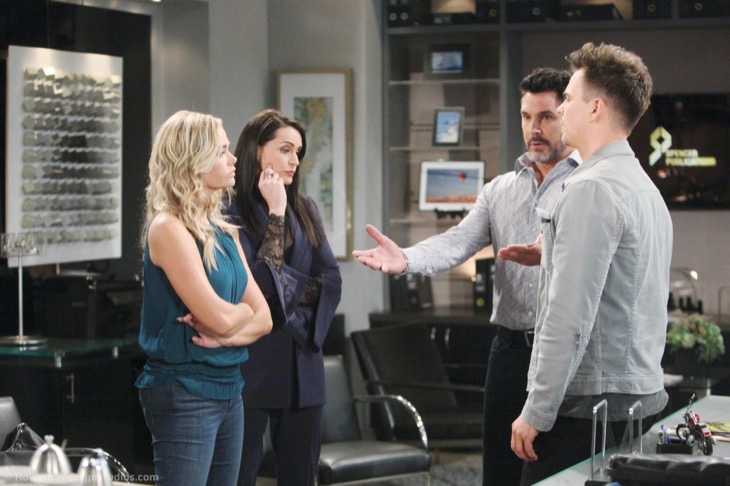 “Bold and the Beautiful” (B&B) spoilers tease that Flo Fulton (Katrina Bowden) will tell her mother that she had a baby a few months ago. And, that’s not all either – she will reveal that she gave her baby up for adoption and Steffy Forrester (Jacqueline MacInnes Wood) adopted her.

Shauna Fulton (Denise Richards) will be stunned. She will wonder why her daughter would do such a thing. And, why didn’t she tell her she was pregnant, to begin with?

Bill Spencer (Don Diamont) is always wanting to hear a juicy scoop that he can use against someone. And, Quinn Fuller (Rena Sofer) knows this. B&B spoilers state that Quinn goes to see Bill to tell him that Flo is Phoebe’s birth mother. Of course, Bill will find that to be a little too convenient.

At some point, Quinn will also find out that Shauna and Bill had a one night stand a long time ago. B&B spoilers reveal that Shauna admits that she got around the block when she was younger. Shauna and Quinn will laugh about it—they slept with the same man!

Wyatt Fuller (Darin Brooks) pushes Flo to take a DNA test to find out the identity of her father. At first, Flo isn’t sure if she should. She admits her mother doesn’t want her to look into his identity.

The Bold and the Beautiful Spoilers: Monday, April 8 – Flo Could Be Bill’s Daughter – Wyatt’s Shocked By Flo’s Kiss

B&B spoilers state that Wyatt will push her to look into it. He will share his story on how he didn’t find his dad until several years ago and he wished he would have looked when he was younger.

Many B&B fans think that her father will turn out to be Storm Logan (William deVry), but CBS has yet to leak that yet. It would be interesting as Katie Logan (Heather Tom) has Storm’s heart. She will reveal the DNA results on Thursday, April 11.

Who do you think will be Flo’s father? Are you surprised that Shauna slept with Bill too? Don’t forget to come back later for more The Bold and the Beautiful (B&B) spoilers, news, and casting updates!