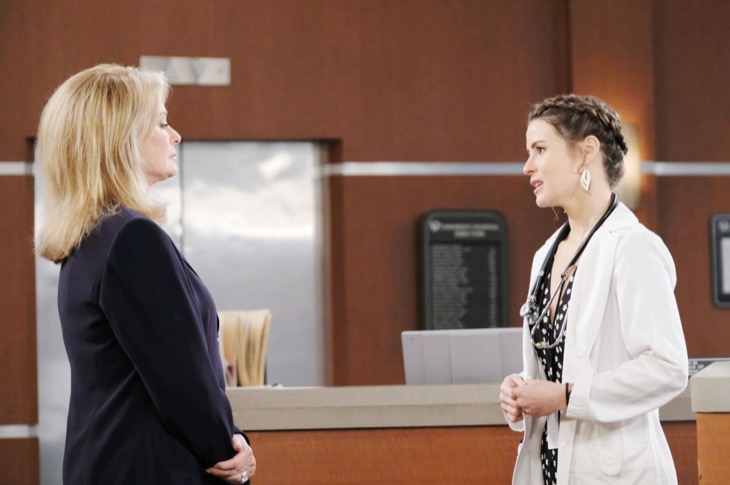 Days of Our Lives (DOOL) spoilers for the week of Monday, April 8 through Friday, April 12, 2019, reveal couples uniting and breaking up as trouble arrives in Salem. Confessions, Startling news and decisions are all a part of this upcoming week. Fans of the NBC soap opera will not want to miss out on a second of the excitement beginning with Monday’s episode!

DOOL Spoilers: Rafe Demands to Know All About Baby David

DOOL sources show that Rafe Hernandez (Galen Gering) wants to know everything he can about baby David and demands Jordan Ridgeway (Chrishell Stause Hartley) tell him who little David’s father is. Rafe, who is always doing the right thing for other people makes the huge decision to take on baby duties. How will his wife, Police Commissioner Hope Williams (Kristian Alfonso) feel about Rafe rescuing another ex over their marriage?

Confessions are in the air as troublemaker Claire Brady (Olivia Rose Keegan) reveals one of her big secrets to Eve Donovan (Kassie DePaiva) while the two plot to end Tripp Dalton (Lucas Adams) and Hailey Chen’s (Thia Megia) charade of an engagement. A surprise guest will arrive in Salem this week, as ICE Agent Smith (Stacie Greenwell) is also set on proving the soon-to-be marriage is a fraud. By week’s end, the wedding is set to take place but an unexpected guest makes an arrival, how will this affect them and will they be able to go through with the sham of a marriage?

Previously on #DAYS, Tripp and Haley struggle to maintain their cover story.https://t.co/ZsCmioRrzb pic.twitter.com/3hLCMflZEE

Days Of Our Lives Spoilers: Jennifer Shocked Jack’s Getting Married

Days of Our Lives spoilers tease that Jennifer Horton (Melissa Reeves) was surprised when Eve announced at the press conference that she and Jack Deveraux (Matthew Ashford) were getting married; the announcement that also threw Jack for a loop. Odd bedfellows and former lovers, Eric Brady (Greg Vaughn) and Jennifer will join forces and make every attempt to make sure that Jack doesn’t go through with the marriage to the wrong woman!

Rex Brady (Kyle Lowder) and Sarah Horton (Linsey Godfrey) have startling news for the newly reunited couple, Sonny Kiriakis (Freddie Smith) and Will Horton (Chandler Massey). How will they feel about Rex and Sarah’s news?

Be sure to tune into NBC’s Days of Our Lives (DOOL) on Monday, April 8, 2019, to catch up on all the exciting storylines unfolding right now in Salem. Check Hollywood Hiccups often for updates, news, rumors, and spoilers!