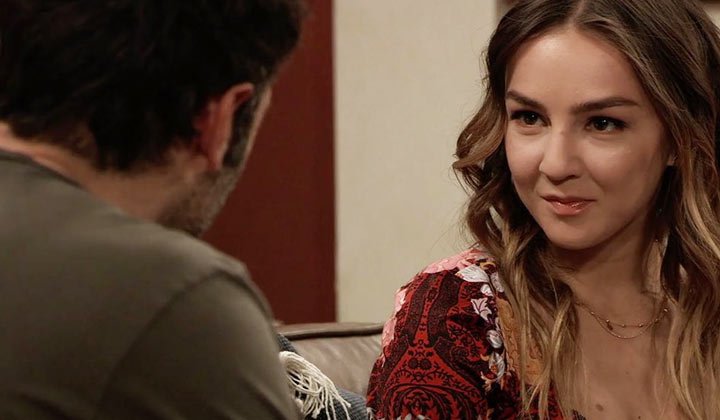 General Hospital (GH) spoilers for the week of Monday, April 8 through Friday, April 12, 2019, reveal sage advice given as another is given a strict warning. Confidences are shared while confrontations happen. Family feuds are all part of the excitement unfolding, beginning with GH’s episode on Monday, April 8!

GH sources show Detective Harrison Chase (Josh Swickard) will take matters into his own hands when it comes to Dawn of Day Cult Leader, Shiloh (Coby Ryan McLaughlin), confronting him and issuing a stern warning. Chase will also be involved with Michael Corinthos (Chad Duell) who turns to him in his time of need after being shaken by some things. Dr. Hamilton Finn (Michael Easton) will offer some sage advice to his younger brother, Chase; but will the PCPD Detective take it?

Kristina Corinthos-Davis (Lexi Ainsworth) proceeds with her initiation into the DoD cult. She will be seen this week as she spends time with Daisy (Kelsey Wang) and Harmony (Inga Cadranel) for her preparations. Harmony will get into some trouble this week and will need to send out a call for help.

Get ready for this year's festivities with a marathon of our newest #GH Collection – The Best of The Nurses Ball! Binge 16 episodes (from 2014 onward) for a limited time, no sign-in required. It couldn't be easier. Enjoy!
CLICK TO WATCH: https://t.co/Epq9a25ZMx #GH56 pic.twitter.com/M6uuAYbB3L

Alexis Davis (Nancy Lee Grahn) continues to trust Neil (Joe Flanigan), who advises her to tread carefully. Alexis is determined to speak to Sonny Corinthos (Maurice Benard) but plays ignorant when it comes ot what she knows. It appears the Davis’ girls will have their issues this week as Molly Lansing-Davis (Haley Pullos) angrily confronts her oldest sister, Sam McCall (Kelly Monaco).

General Hospital spoilers tease that Anna Devane (Finola Hughes) will have an emotional week as she learns her twin sister, Alex lied from ex-husband, Robert Scorpio (Tristan Rogers) making her question if even Robin Scorpio-Drake (Kimberly McCullough) is even her daughter! Robert will inadvertently interrupt Finn’s marriage proposal to Anna. Will the good doctor get another chance to propose to the beautiful WSB Agent?

General Hospital Spoilers: Chase Gives Shiloh A Stern Warning –Stay Away From Willow Or Else!

Valentin Cassadine (James Patrick Stuart) will have a run-in with Spencer Cassadine (Nicolas Bechtel) while Laura Webber (Genie Francis) is able to soften her stance on things happening in her life right now. Does this mean she is willing to forgive Dr. Kevin Collins (Jon Lindstrom) for all his betrayals?

Be sure to tune into ABC’s General Hospital (GH) on Monday, April 8, 2019, to catch up on all the excitement unfolding right now in Port Charles. Check Hollywood Hiccups often for updates, news, rumors, and spoilers!