The Bold and the Beautiful Recap For Tuesday, April 9: Wyatt Rocked By Latest Revelation– Hope Struggles With Her Loss 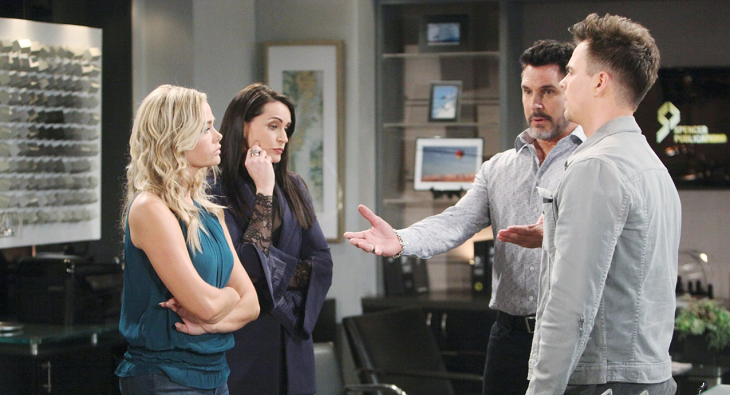 The Bold and the Beautiful(B&B)  recap for Tuesday, April 9 finds Wyatt Spencer (Darin Brooks) rocked by the latest revelation about Flo Fulton (Katrina Bowden) and the identity of her biological father. Zoe Buckingham (Kiara Barnes) gives Hope Logan (Annika Noelle) advice that she might not follow, while Bill Spencer (Don Diamont) has several things he wants to settle with Shauna Fulton (Denise Richards) and Quinn Forrester (Rena Sofer).

It begins at Forrester Creations, where Quinn is left stunned over the possibility that both she and Shauna might have given birth to Bill Spencer’s children. Bill then summons everyone to Spencer Publications.

Elsewhere, Hope and Zoe reflect on life, loss, and love and talk about Thomas Forrester (Matthew Atkinson). Zoe thinks that Hope and Liam Spencer (Scott Clifton) should think about having another child, but Hope says she’s not ready for it.

Hope mentions that she misses Thomas and his son Douglas and wants to see how they are doing. Zoe doesn’t think it’s a good idea. Hope then mentions that Flo has been struggling with her loss too and can’t help but wonder how she’s been able to deal with it all. Zoe is left irritated over the fact that Hope isn’t taking her advice.

At Flo’s apartment, Wyatt is left a little startled after their kiss. Flo says that even though time and distance has torn them apart, she will always love him. Wyatt blames his mother for leaving Las Vegas in the middle of the night, however, Flo doesn’t hold it against him. Wyatt then asks Flo to check her email for the DNA results. She ends up taking a call from Hope, who suggests that they should get together at Forrester Creations.

At Spencer Publication, Shauna says that she’s not 100 percent certain that Bill is Flo’s biological father. They had a one night stand and that’s it. Quinn mentions that she hasn’t been honest with Flo.

If both she and Wyatt find out that they are brother and sister, it will rock their world. Bill asks if Wyatt and Flo are romantically involved. Wyatt says no and reminds his father that he’s still with Sally Spectra (Courtney Hope). After going back and forth, Quinn finally blurts out that there’s a possibility that Wyatt and Flo might be related. Wyatt is left speechless.