The Young and the Restless Spoilers: Why Is Victor In Las Vegas? Vicki and Billy Intrigued By Moustache’s Mysterious Angle 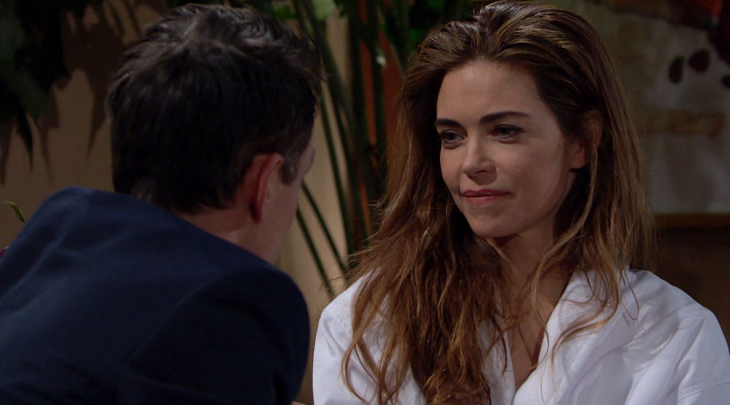 Vicki (Amelia Heinle) learned something interesting about Victor (Eric Braeden) from Brandon (Mitch Eakins) on The Young and the Restless. The ‘Moustache’ has apparently been involved with gambling in recent weeks.

Brandon’s tell about Victor’s involvement in a high stakes poker game struck Vicki as very odd. Billy’s (Jason Thompson) follow of his one true love, which obviously implies Victoria and not Victor, who he despises, opens a new storyline path on Y&R.

Y&R Spoilers– Why Is Victor Gambling?

Victor has never been known to be a gambler. That tag has exclusively been Billy’s, dating back to the Billy Miller days. This is why Vicki was also perplexed to also learn that her dad may appear at another scheduled game shortly.

Having escaped Genoa City, Wisconsin, if merely for a few days, Vicki was soon trailed by her once and maybe someday again husband. Billy was rightly concerned that the mother of his children was reeling as a result of all the drama that J.T. (Thad Luckinbill) injected into her life for the past year-plus.

Fans of ‘Villy’ remain hopeful that Vicki and Billy’s continued interactions will eventually lead to another chance at a revived and then sustained relationship. This may be the secondary tease.

Young And The Restless Spoilers– Is Victor Looking For Adam?

Vicki’s meet up with Brandon at the Vegas casino will prove to be a plot vehicle that at least gives Braeden’s character a new storyline to play. What the head of the Newman clan is up to isn’t yet clear.

Eakins might be a one-off character. However, the inclusion of his character’s last name, Rose, projects to Brandon being at least a recurring personality.

Victor could be using the poker games as a cover for his trail of Adam (Mark Grossman). If news of the Victor, Junior recast hadn’t just dropped, it would be easier to conclude that the head of Newman Enterprises was working against Dark Horse, though Victor and Nick (Joshua Morrow) remain in truce status.

So, a more tantalizing effort that could involve his younger son seems to be the better option and surely would be more engaging for the audience.