Bold and the Beautiful Recap, Thursday, April 11: Bill Spencer Is Not The Father– Brooke Worries Hope Is Too Close To Flo 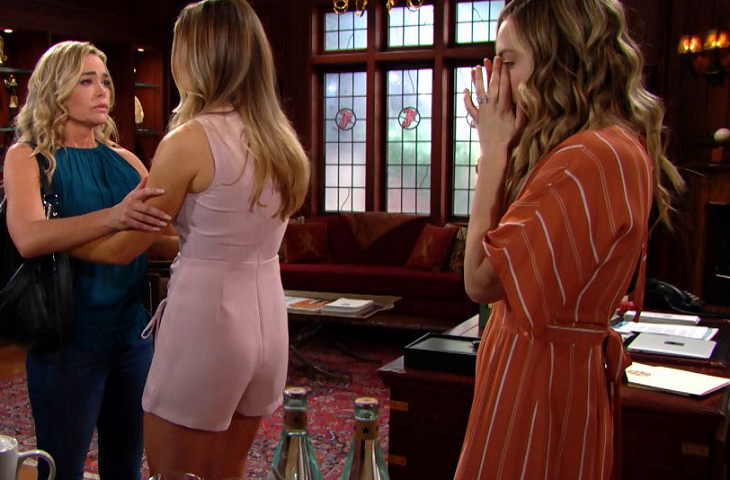 It begins at Spencer Publications where Quinn Forrester (Rena Sofer), Shauna Fulton (Denise Richards) and Wyatt Spencer (Darin Brooks) all check out the computer screen to see the results of Flo’s DNA test.

Thankfully for Bill, he’s not the father. Wyatt takes a look and then turns the laptop for Shauna to see. It says that there’s a 52 percent match that Stephen Logan, Jr., who everyone remembers best as Storm Logan, might be the father.

Shauna recalls the good times she had with Storm and is thankful to know that Bill’s not the father. Bill, however, tells Shauna that Storm died. Wyatt is also relieved to know that he and Flo are not brother and sister and that she is in fact, a Logan. When everyone leaves, Bill celebrates the DNA results by on his own.

At Brooke’s place, the Logan sisters talk about Hope and her friendship with Flo. Brooke doesn’t think that Hope is doing herself any favors by becoming close to Baby Phoebe’s biological mother. After their little discussion, Donna notices a scar on Katie. They reminisce about Storm and all of the sacrifices he made for his family.

Storm shot himself so he gave his heart to Kate in order to save her life. Even though Storm wasn’t a perfect man, Brooke says that he always put his family first. Katie says that she will always be grateful for the sacrifice that Storm made for her. They then all agree that they want to help Hope during this very difficult time in her life.

At Forrester Creations, Flo is very close to telling Hope the truth about Baby Beth. She hints that someone is responsible for what happened that tragic day in the hospital room. Hope insists that she’s the person that needs to be blamed. Hope also thinks that she and Flo have a special connection.

Flo, however, wants her to listen to what she has to say. Flo now has tears in her eyes but the moment she tries to tell Hope the truth, Shauna, Wyatt, and Quinn appear. Shauna tells her daughter that her father was Storm Logan. It turns out that Hope and Flo are actually cousins. Flo has a look of shock on her face.

Days Of Our Lives Spoilers For Friday, April 12: Eric Finds Himself In His Worst Position Yet — Sarah Want To Marry Rex Right Away

The Bold and the Beautiful airs weekdays on the CBS network. You will have to check your local listings for times. In the meantime, drop us a line with your thoughts in our comments section below.