The Bold And The Beautiful Spoilers: Shauna Comes Unglued When She Learns Of Flo’s Part In The Baby Swap 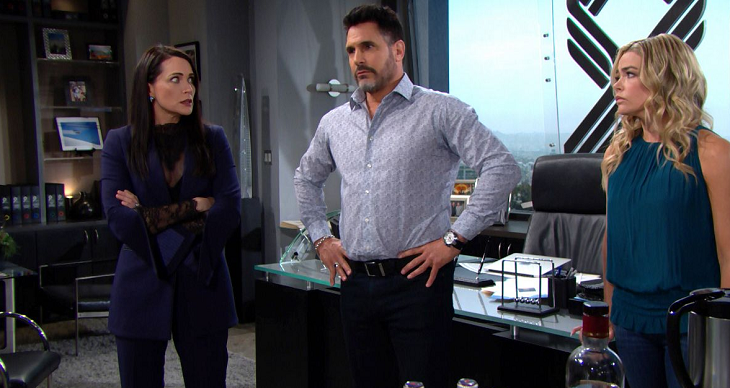 The Bold and the Beautiful (B&B) spoilers tease that Shauna Fulton (Denise Richards) will come unglued when she learns that her daughter supposedly just had a baby that she gave up for adoption. Shauna will need some time to process the juicy scoop and, then, will have some choice words for her daughter. Here’s what you need to know about what’s ahead on B&B.

After Wyatt Fuller (Darin Brooks) learned to Shauna could be his sister, he couldn’t help but blurt out that Flo Fulton (Katrina Bowden) is keeping her own secret. He tells Bill Spencer (Don Diamont), Shauna, and Quinn Fuller (Rena Sofer) that Flo had a baby and handed the little one to Steffy Forrester (Jacqueline MacInnes Wood) to adopt. It will be stunning information as Shauna had no idea her daughter was expecting.

B&B spoilers state that Shauna will corner her daughter and ask her who her baby’s father is. She will want to know why she gave the child up and never told her she was expecting. Flo will obviously have trouble answering the questions as she never was pregnant. The spoilers suggest she will confess everything to her mom, but make her swear not to tell a soul.

Shauna will be upset with her daughter. She will not understand how she could get caught up in a scheme like this. Flo will try to explain that she thought Reese Buckingham (Wayne Brady) was romantically interested in her, but he wasn’t. He only used her to get her to pretend to be the baby’s birth mother.

B&B spoilers state that Flo will not tell her mother the whole truth. Apparently, she will leave out the part of the story that Reese stole Hope Logan’s (Annika Noelle) baby. She will imply the baby was from some unknown woman.

It looks like Flo is getting close to confessing the whole thing to someone. How long can she wait with the amount of guilt she is carrying around?

Do you think Flo will reveal Hope’s baby is alive soon? Don’t forget to come back later for more The Bold and the Beautiful (B&B) spoilers, news, and casting updates!