The Young And The Restless Spoilers: Friday, April 12 – Kyle Stays With Summer – Jack Holds Onto Fenmore’s – Phyllis Is Defeated 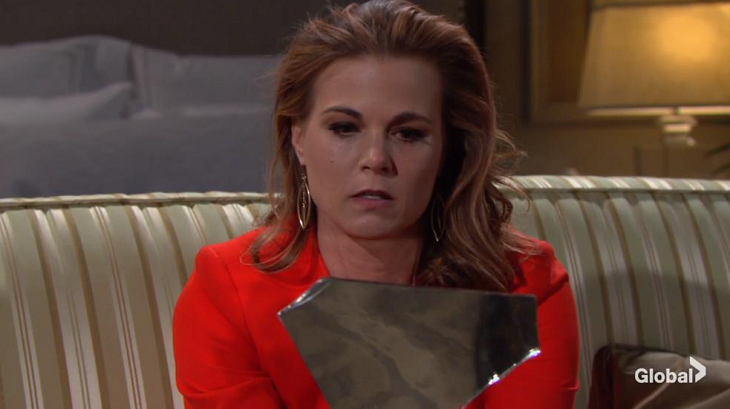 The Young and the Restless (Y&R) spoilers for Friday, April 12, tease that Lola Rosales (Sasha Calle) and Rey Rosales (Jordi Vilasuso) will catch up at his apartment. Lola will spill to Rey that she nearly slept with Kyle Abbott (Michael Mealor), but that Kyle stopped it before it went that far. Rey will be surprised by everything, but he’ll come to realize that Lola really wants Kyle back.

Rey and Lola will also discuss Mia Rosales (Noemi Gonzalez), and how Mia subconsciously wanted to be with Arturo Rosales (Jason Canela). Rey will regret that he wasted time, but he’ll say that now he’s with the right person. He’ll tell Lola that if Kyle’s the one, it will all be worth it.

Next on Y&R, at the Abbott estate, Kyle will lie to Summer Abbott (Hunter King) and tell her that she couldn’t find him earlier because he was at work and then went for a walk. Summer will suggest they celebrate her going back to work at Jabot, and they’ll head upstairs to the bedroom.

Downstairs, Phyllis Summers (Gina Tognoni) will arrive and show Jack Abbott (Peter Bergman) the photos of Kyle and Lola at the GCAC from earlier. Jack will wonder why she’s showing him the pictures, and eventually, he’ll realize that she’s there to blackmail him. Phyllis will state that the price of her silence about Kyle’s dalliance with Lola is Fenmore’s and seed money.

Next on Y&R, Jack will text Kyle to come downstairs and he’ll inform Kyle about Phyllis’ demands. Kyle will state that he didn’t sleep with Lola, but that he and Lola are in love. However, he and Summer also have a connection. Jack will tell Kyle to make a decision soon, but in the meantime, he’ll give Phyllis what she wants.

When Kyle goes back upstairs, Summer will guess that he slept with Lola, but he’ll tell her that it didn’t get that far. Summer will say that she knows Kyle isn’t over Lola, but that she forgives him. Kyle and Summer will cuddle, and while she falls asleep, he’ll ponder things.

Young And The Restless Spoilers– Jack Makes Lauren An Offer

At the GCAC, Lauren Baldwin (Tracey E. Bregman) will tell Michael Baldwin (Christian LeBlanc) about her call with Phyllis, who is confident that Jack will give her Fenmore’s. But Michael will be worried about what Phyllis is up to. Michael will reveal that he arranged to have some alone time at the club with his wife, and they’ll dance and kiss. Later, Phyllis will arrive and assure them that she knows what she’s doing.

Next on Y&R, Jack will arrive in Phyllis’ room at the GCAC and tell her that he won’t deal with her. Furthermore, he’ll say that Kyle is breaking things off with Summer and that Phyllis gambled and lost. Phyllis will get upset and break a mirror, ordering Jack to leave.

Back downstairs at the club, Michael will step out to take a call and Jack will join Lauren to tell her that Phyllis’ big plan failed. Lauren will say that she’ll still fight to protect Fenmore’s, and Jack will promise to take both of their companies to new heights. Jack will say that Lauren doesn’t need Phyllis and that the two of them are a great team.

Finally, on Friday’s episode of Y&R, Phyllis will gaze at herself in the broken mirror, looking utterly defeated.