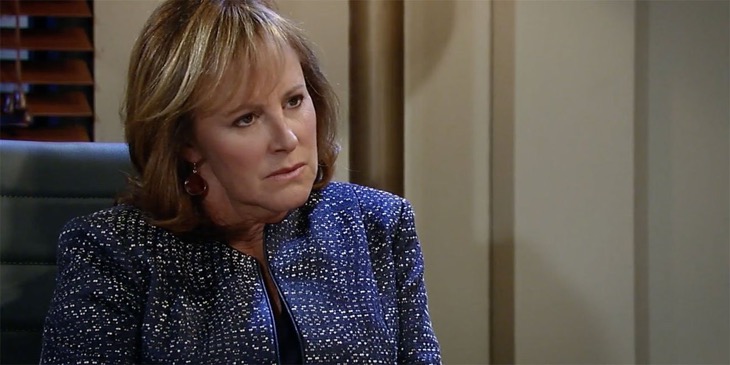 General Hospital spoilers tease that Valentin Cassadine (James Patrick Stuart) will ask Nora Buchanan (Hillary B. Smith) for her help again, with some legal issue, but it will be very inconvenient timing for Nora! On Friday, April 12th’s General Hospital episode, Nora had just finished getting the charges dropped against Dr. Kevin Collins (Jon Lindstrom), citing that he could not be prosecuted for aiding and abetting a legally dead man.

She had called her husband Bo Buchanan (James S. Woods), and let him know she was done in Port Charles and would be returning home to Llanview, Pennsylvania where they live.

Nora obviously must hold licenses to practice law in both Pennsylvania and New York. But before she could fully leave the courtroom, Valentin showed up, telling her that he would need her services again, and General Hospital viewers saw a look on Nora’s face that seemed to say, “OH NO, I HAVE TO CALL BO BACK AND BREAK OUR DATE!” Or was it about Valentin himself, and the phrase “OH, NO, NOT HIM AGAIN?”

General Hospital Spoilers: Franco Demands To Know Why Cameron Got Into A Fight At School– Was He Protecting Aidan From A Bully?

The last time Valentin used Nora was a little over two years ago when he and Lulu Falconeri (Emme Rylan) were in a custody battle over their daughter, Charlotte Cassadine (Scarlett Fernandez). Nora was able to bring both parties to a satisfactory custody arrangement at the time, although Valentin and Lulu worked things out better among themselves as both communicated and compromised the custody arrangement for Charlotte’s best interests. So what will Valentin want Nora for this time?

General Hospital viewers know that Valentin warned Spencer Cassadine (Nicolas Bechtel) in Friday’s episode not to mess with trying to investigate what he and Sasha Gilmore (Sofia Mattsson) had to go on, because Charlotte had told him about his voter fraud in rigging the polling place computers to make sure that his grandmother, Laura Webber (Genie Francis) won the mayoral race! But then there’s the little problem of Lulu suddenly taking off for Paris and as he reminded Laura, the custody arrangement had been between him and Lulu, not he and Laura!

I want to see Valentin go down in flames. I want to see Laura, Lulu, and Spencer be there to see it. I want Charlotte to be raised by her mother and taught kindness and empathy. #GH #GenieisGH pic.twitter.com/4zkyHowzk3

Laura pressed the issue of shared custody in Lulu’s place, and this is likely to be what he wants Nora’s help with. Unfortunately for Nora and Bo, this will require her to stay in Port Charles much longer than she expected to; although the PCPD sure could use another hand right now if former Llanview top cop Bo wanted to lend a hand and GH powers that be wanted to invite him and write him into a script! Stay tuned to General Hospital and keep checking General Hospital spoilers frequently for all the latest updates, news and spoilers!