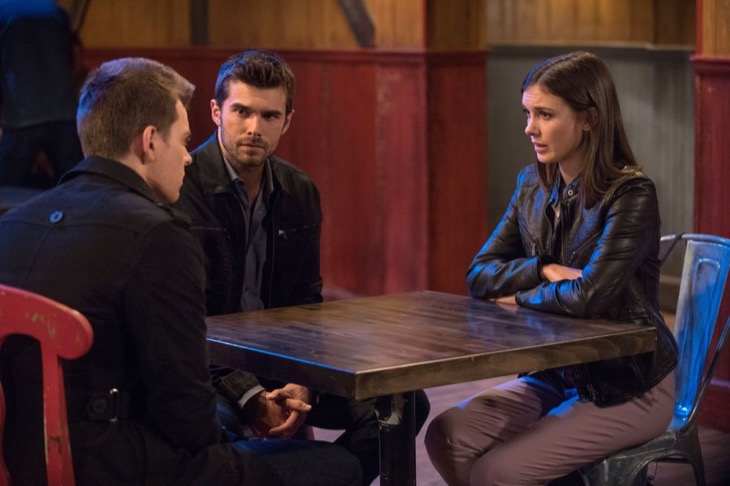 General Hospital (GH) spoilers for the week of Monday, April 15 through Friday, April 19, 2019, reveal deceptions exposed, secrets figured out, disagreements, warnings, and angry confrontations. GH fans will not want to miss out on all the exciting storylines beginning with Monday’s episode!

GH sources tease that trouble continues to brew with Shiloh (Coby Ryan McLaughlin) and his cult, Dawn of Day. Sam McCall (Kelly Monaco) continues her manipulations with Shiloh; but how long before he figures out what she is up to? Meanwhile, Jason Morgan (Steve Burton) discovers that Brad Cooper (Parry Shen) is also involved with Dawn of Day. By the end of the week, Shiloh will have an angry confrontation with Jason.

Kristina Corinthos-Davis (Lexi Ainsworth) may have been forcibly removed from the DoD home and into a safe house by Jason Morgan, with the consent of her mother, Alexis Davis (Nancy Lee Grahn) and father, Sonny Corinthos (Maurice Benard); but she continues to be the thorn in many people’s side as Alexis finds out that Julian Jerome (William deVry) helped her daughter out. How will Julian react when he learns what his money was used for?

General Hospital Spoilers: Franco Demands To Know Why Cameron Got Into A Fight At School– Was He Protecting Aidan From A Bully?

General Hospital spoilers show Michael Corinthos (Chad Duell) figures things out and will have a lot of sympathy for the situation. Does he learn about Willow Tait’s (Katelyn MacMullen) baby with Shiloh or is there something much more sinister in her past?

Franco Baldwin (Roger Howarth) will have a difficult week as he will still have problems with stepson, Cameron Spencer Webber (William Lipton); with the two continuing to disagree and butting heads. Franco will also meet with Port Charles Police Commissioner Jordan Ashford (Briana Nicole Henry) but is the reformed serial killer in trouble or is his help needed again?

Port Charles mobster, Sonny Corinthos will have an unsettling disagreement with DA Margaux Dawson (Elizabeth Hendrickson). With the two back in each other’s orbit, how will they cope with the tension between them? Sonny will also have a dire warning for a right-hand man, Jason as his wife, Carly Corinthos (Laura Wright) will be overcome with emotion and ends up crying.

In other GH spoilers, Dr. Kevin Collins (Jon Lindstrom) will receive some good news this week and a sweet invite; but will he be able to accept in spite of all the guilt he feels over everything his brother, Ryan Chamberlain did? Ava Jerome (Maura West) will continue to struggle this week as she faces rejection.

Be sure to tune into ABC’s General Hospital (GH) on Monday, April 15, 2019, to catch up on everything happening in Port Charles right now. Check Hollywood Hiccups often for updates, news, rumors, and spoilers!