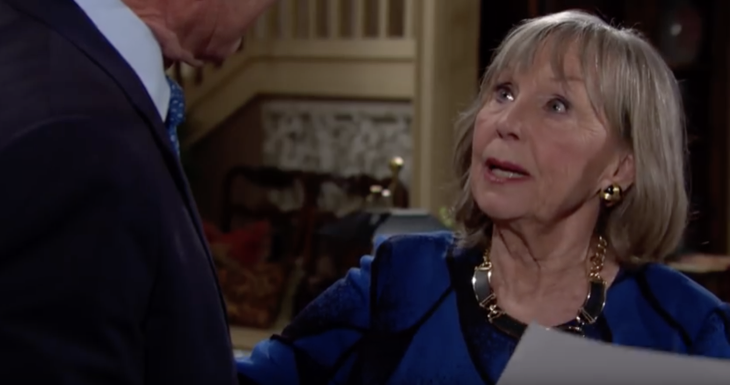 “Young and the Restless” (Y&R) spoilers tease that a big secret is about to rock Genoa City and make it almost impossible for Villy to get back together. Also, Dina Mergeron (Marla Adams) will crush Jack Abbott (Peter Bergman) when she reveals that he is nothing like his father, John (Jerry Douglas). Here’s what you need to know about what’s ahead on Y&R during the week of April 15.

Nothing means more to Jack more than living up to his father’s legacy. And, his mother, even in her state of mind, knows that. Dina tells Jack that he is ruining his father’s legacy with all the fighting he is doing with Ashley Abbott (Eileen Davidson). It is something that gets to Jack as he tries to explain his case, only to realize she may be right.

Chief Williams (Doug Davidson) is sure that Rey Rosales (Jordi Vilasuso) is lying about Lola Rosales’ (Sasha Calle) case. He believes that he knows way more than he’s letting on. So, Paul decides to put the heat on him and see if he cracks.

Y&R spoilers state that Rey begins to unravel. First, he confesses everything to Sharon Newman (Sharon Case) and makes her swear to secrecy.

Then, he makes a silence pact with Arturo Rosales (Jason Canela) about Mia’s (Noemi Gonzalez) role. It’s not looking good for Rey. The fact is Paul knows he knows more than he’s admitting and he’s determined to make him talk.

It’s pretty clear that Phyllis Abbott (Gina Tognoni) is grasping at straws when she threatens to reveal the juicy scoop that Billy slept with Summer Newman (Hunter King) to Victoria Newman (Amelia Heinle).

Y&R spoilers state Billy does everything in his power to keep her from blabbing, but none will work. In the end, Phyllis will run to Victoria with the scoop, hoping it ruins Billy chances at happiness.