Bold And The Beautiful Spoilers: Tuesday, April 16 – Shauna Plays Along With Baby Ruse – Bill Gets A Clue About Quinn 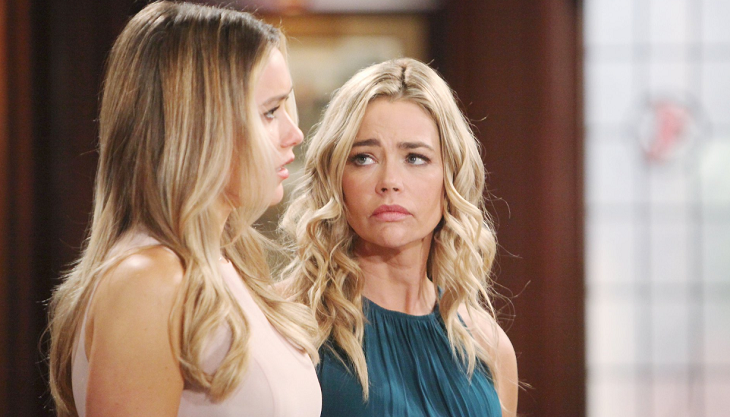 The Bold and the Beautiful (B&B) spoilers for Tuesday, April 16, tease that Florence “Flo” Fulton (Katrina Bowden) will be in a tight spot. With her mother Shauna Fulton (Denise Richards) standing right there, Hope Spencer (Annika Noelle) just brought up the fact that Flo is Phoebe Forrester’s (Isabella de Armas and Redford Prindiville) birth mother.

Of course, Shauna was stunned by this revelation, and according to B&B spoilers, she’ll insist that Hope is wrong. Shauna will maintain that her daughter never gave birth and has never even been pregnant, and it looks like she won’t back down. Wyatt Spencer (Darin Brooks) will even get involved and argue with Shauna over the “fact” that Flo had a baby.

Flo will have to act fast if she wants to continue the ruse that she’s Phoebe’s birth mom. B&B spoilers say that Flo will pull Shauna aside for a private chat. Shauna will want to know what’s up, and Flo will tell her that all will be revealed soon, but for now, she needs to go along with the lie that she was pregnant and gave up a baby for adoption.

According to B&B spoilers, Shauna will agree to support her daughter and maintain the lie, but she’s going to want some answers later. It looks like Flo will be able to smooth things over and make it look like her mom simply didn’t know about her pregnancy, so her secret will be safe for now.

Bold And The Beautiful Spoilers– Bill And Quinn Chat

Meanwhile, on the new episode of B&B on Tuesday, April 16, Bill Spencer (Don Diamont) and Quinn Forrester (Rena Sofer) will continue their chat in Bill’s office. These two normally can’t stand each other, but they’ll actually have a conversation that leads Bill to a new insight.

Of course, Quinn has just told Bill about Flo being Phoebe’s birth mother, so Bill is in shock. But soon their conversation will turn back to their son and his romantic situation. Quinn doesn’t particularly care for Wyatt being in a relationship with Sally Spectra (Courtney Hope), and the two may chat about that.

Quinn would prefer that Wyatt was with Flo instead of Sally, and B&B spoilers say that she’ll soon enact a plan to ruin Wyatt and Sally’s relationship to make way for Flo. Bill may caution against that, but it’s doubtful that Quinn will listen to him.

According to B&B spoilers, as the two discuss Wyatt’s relationship with Sally, Bill will realize something about Quinn. She is always hard on Wyatt’s girlfriends, and Bill will realize exactly why that is. It could be because Wyatt tends to choose strong women like Quinn. We’ll see what Bill discovers.

The Bold And The Beautiful And The Young And The Restless News: Real-Life Soap Couple Announce Pregnancy– Darin Brooks And Kelly Kruger Are Expecting!