The Bold And The Beautiful Recap, Monday, April 15: Flo Grows Closer To The Logan Family–Shauna Learns The Baby Truth 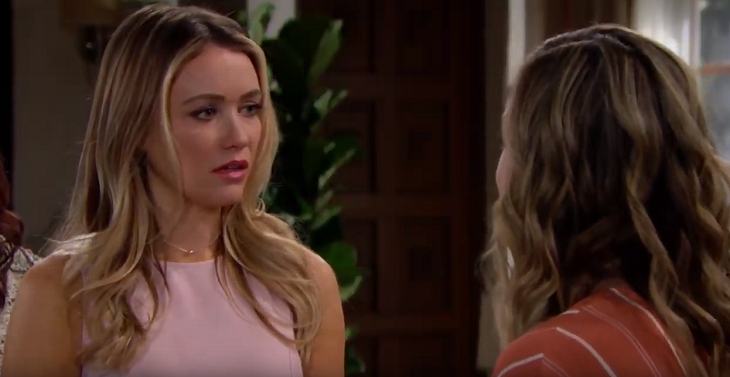 The Bold and the Beautiful (B&B) recap for Monday, April 15 finds Flo Fulton (Katrina Bowden) growing closer to the Logan family as she continues to learn more about her biological father. Also, Quinn Forrester (Rena Sofer) irons out her issues with Bill Spencer (Don Diamont) while Shauna Fulton (Denise Richards) makes a new revelation about her daughter.

It begins at Forrester Creations, where Hope Logan (Annika Noelle) thinks that Flo has been trying to tell her that the two of them are indeed cousins this entire time. Shauna feels guilty that she didn’t know who Flo’s real father was this entire time. She had always assumed that it was Bill, considering how they had a one night stand back in Las Vegas.

Hope, meanwhile, is excited and thinks this is an opportunity for her and Flo to grow even closer. She wants Flo to meet the rest of the Logan family. A reluctant Flo follows her.

B&B Spoilers — Quinn Shocked Bill Cheated On Her With Shauna

At Spencer Publications, Bill and Justin Barber (Aaron D. Spears) talk about Flo’s paternity results. Justin thinks that it’s a good thing Bill isn’t the father. Quinn then appears. Bill says that he doesn’t want to talk about the paternity issue, while Quinn can’t believe that Bill cheated on her with Shauna.

Bill dismisses it as just a one-time ordeal and that it meant nothing to him at the time. Quinn then changes topics and tells Bill that Flo is Baby Phoebe’s maternity mother. Bill looks surprised to hear about this for the first time.

At Brooke’s (Katherine Kelly Lang), the Logan sisters are surprised to see Hope, Flo, Shauna and even Wyatt Spencer (Darin Brooks). Katie Logan (Heather Tom) wants to know why Wyatt is there, prompting him to explain that he and Flo used to be high school sweethearts. Wyatt then reveals that Flo’s DNA results found that Storm Logan was her biological father.

Donna Logan (Jennifer Gareis) is especially impacted by this, as she believes Storm might have made different decisions in his life, should he have known that he was Flo’s father. All the sisters can see a little of Storm in his daughter.

Katie tells Flo the story of how Storm killed himself in order to save his sister. Hope then interjects and mentions that Flo is a true Logan – she gave up her daughter for Steffy Forrester (Jacqueline MacInnes Wood). Flo doesn’t want to talk about it, however, Hope can’t stop talking about how Phoebe is actually one of them now.

Shauna is surprised to hear all of this for the first time. She never knew that her daughter was pregnant, to begin with. Shauna looks at Flo, wanting answers. Hope then realizes that Steffy is raising a Logan and stutters the word, “Oh my gosh.”

The Bold And The Beautiful Spoilers: Flo Compelled To Bury Secret – Thomas Falling For Hope

The Bold and the Beautiful airs weekdays on the CBS network.