Days of Our Lives Spoilers, Wednesday April 17: Chloe Is Furious With Brady– Eric Has Regrets About Nicole 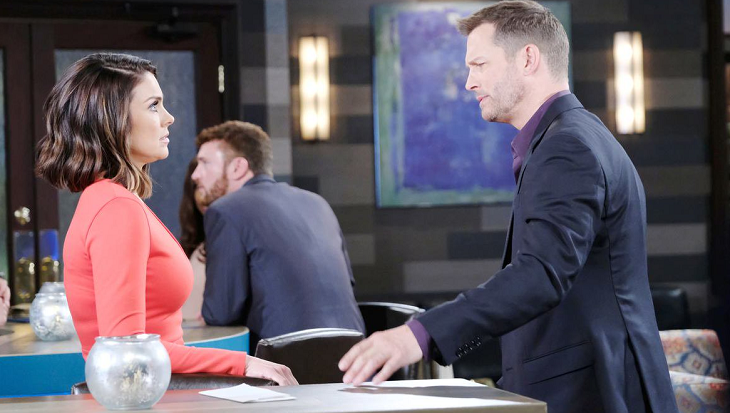 Days of Our Lives (DOOL) spoilers for Wednesday, April 17 finds that Chloe Lane (Nadia Bjorlin) is furious with Brady Black (Eric Martsolf) for not telling her the truth. Ben Weston (Robert Scott Wilson) finds out that the cartel is back in Salem. Also, Gabi Hernandez (Camila Banus) and Ciara Brady (Victoria Konefal) are going to find themselves in serious trouble. Here’s what you need to know about what’s ahead on DOOL.

It begins with Chloe learning that Brady hasn’t been very truthful about some of the stuff he’s been doing behind her back. Even though Chloe is none too pleased with his deception, things are going to change the moment that Brady finds out that she’s in danger.

This time around it won’t be Stefan DiMera (Brandon Barash) trying to keep her safe. Eric will do everything he can to not only win her back but repair the damage between them. Will Chloe learn how to trust him again?

DOOL Spoilers– Ben Learns The Cartel Is Back In Salem!

Also, Ben will learn that the cartel is back in Salem. They are obviously looking for Chloe, as they are hellbent in seeking revenge on her after she killed their cartel leader back in Mexico last year. However, Ben is going to have another reason to worry.

That’s because both Gabi and Ciara are going to end up in the wrong place at the wrong time. It’s going to be a mistake that might lead to some grave consequences for everyone involved. Later on in the week, Ben will team up with Hope Brady (Kristian Alfonso) on a rescue mission similar to what he had experienced earlier this year.

Days Of Our Lives Spoilers– Eric Has Regrets About Nicole

Marlena Evans (Deidre Hall) and Sonny Kirikias (Freddie Smith) will be on pins and needles as they await Will Horton’s (Chandley Massey) test results. All three know that his future is in his doctor’s hands. Fans will simply have to tune in to find out what will happen next.

Days of Our Lives airs weekdays on the NBC network. In the meantime, come back to Hollywood Hiccups for all the latest news and updates right here!