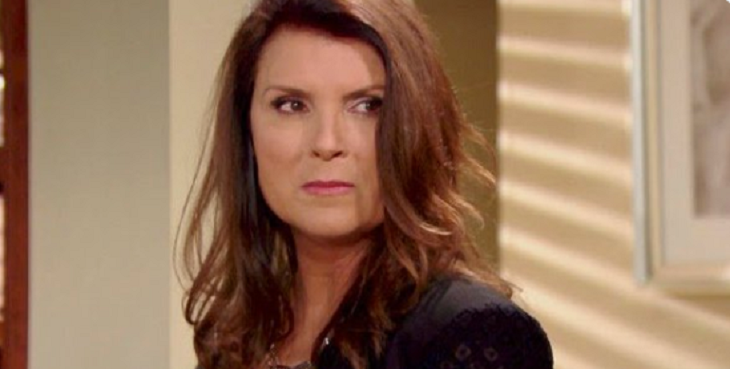 The Young and the Restless and The Bold and the Beautiful alum Kimberlain Brown reflects on her soapy past. She believes to this day that Sheila Carter is one of the best villains in daytime history. And, the truth is, she is not wrong, either.

Sheila and Lauren Fenmore (Tracey E Bregman) had a longstanding feud. It all started when Lauren was married to Scott Grainger and treated him as though she didn’t want him around. Sheila wanted a life with him and envisioned them working in this hospital together. Then, Lauren got pregnant with his child, which complicated Sheila’s plan. She ended up slipping Scott a Roofi and stealing her child to pass off as her own.

That moment Eric Forrester calls to tell you that Sheila Carter is alive & living in LA:#YR #BoldandBeautiful pic.twitter.com/vRZHX8afHJ

Brown noted that the reason Sheila stole Lauren’s baby was she felt she deserved a life with Scott and Lauren didn’t. The fact that Lauren didn’t love him and had a family with him drove Sheila over the edge.

Kimberlain recalls that her catfights with Tracey were always fun. And, she noted what makes them even better is they are close friends in real life.

Not only did Sheila have a long-standing battle with Lauren, on B&B, but she and Quinn Fuller (Rena Sofer) also had quite the drama going for a while. Sheila felt like she was more deserving of Eric Forrester (John McCook) than Quinn and she did everything in her power to drive them apart.

In the end, nothing worked and Eric told Sheila he didn’t love her, he loved his wife Quinn.

Kimberlain said that nowadays she doesn’t do much work on soap operas. However, she believes that her role, Sheila Carter is one of the best villains in daytime history. And, she’s probably right on the money about that, too. Sheila is and still is completely terrifying.

The Young And The Restless Spoilers: Is Devon Ready For A New Love?

Do you think Sheila Carter is the best villain in daytime history? Don’t forget to come back later for more The Young and the Restless (Y&R) spoilers, news, and casting updates!