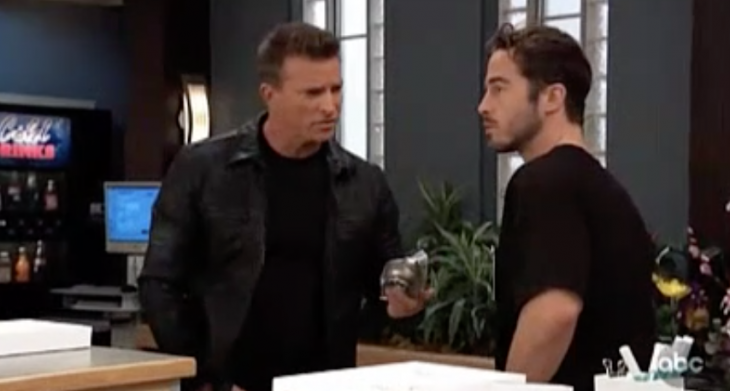 Welcome to your Wednesday, April 17 General Hospital recap! We begin our day at Anna Devane’s (Finola Hughes) house where Hamilton “Finn” (Michael Easton) is answering her door, it’s Harrison “Chase” (Josh Swickard) with a bottle of champagne. Chase has brought the bottle as a congratulations on the marriage proposal. At the hospital, Elizabeth Webber (Rebecca Herbst) leaves Franco Baldwin (Roger Howard) a voicemail asking where he is.

Franco Baldwin (Roger Howarth) walks into Nina Reeves (Michelle Stafford) office and says they need to talk about their stepkids. Franco says they need to talk about Aiden and Charlotte – the bullying has gotten much worse. Nina freaks out and says that Charlotte is not a bully, she’s a smart girl. Franco explains about the gay part and Nina feels sympathy; she did not realize this kind of bullying was still going on. They come to an agreement, but Charlotte must become friends with Aiden.

Elizabeth runs into Lucas Jones (Ryan Carnes) and says things are not going well with Aiden. Elizabeth explains the fight that happened between Franco and Cameron. Elizabeth says that Cameron wants his brother to be “less gay.”

GH Spoilers– Michael And Willow Talk About Her Baby

At Charlie’s Pub, Michael Quartermaine (Chad Duell) and Willow Tate (Katelyn MacMullen) are discussing the baby she had. Willow admits that her baby did not die as she said and it is alive and well. Willow apologizes for saying her baby died and that it was not fair. Michael says he can’t imagine not knowing where his child is, Willow says, “he’s here in Port Charles.”

At the metro court, Sonny Corinthos (Maurice Bernard) is reading the Dawn of Day book as Margeaux Dawson (Elizabeth Hendrickson) gets off the elevator and approaches him. She reminds Sonny that her hands are clean, but she will eventually find some dirt on him.

Sonny brings up the fact that she stopped the Ryan Chamberlain (Jon Lindstrom) investigation and maybe she should focus on that and not him. Sonny says that Ryan’s victims deserve justice. Jason shows up and Margeaux attacks him as well about the Shiloh altercation.

At the hospital, Brad Cooper (Parry Shen) signs up for a parenting group at Dawn of Day. Jason Morgan (Steve Burton) approaches and asks again about the substance on the DOD cup. Brad says it’s a natural ingredient that can be found anywhere. Jason notices the Dawn of Day website on his computer.
Brad explains to Jason that he has been doing some classes at DOD.

Finn's not ready to propose, West Coast. Maybe a visit from Chase is the thing he needs to process everything's that's happened.
A heartwarming, new #GH starts RIGHT NOW on ABC! @josh_swickard pic.twitter.com/CXQGkH3jHi

Shiloh Archer (Coby Ryan McLaughlin) arrives at the DOD house and says to Sam Mccall (Kelly Monaco) that’ he has had no luck finding Kristina Davis (Lexi Ainsworth). Shiloh says he believes that Kristina was kidnapped by Jason Morgan. Sam says that it’s possible, but she does not believe Jason took her.

Sam blames herself for Kristina being taken the night before, continues to trick Shiloh into thinking she doesn’t know.

Chase Harrison (Josh Swickard) comes in with his non-alcoholic drink and Finn explains he did not ask Anna Devane (Finola Hughes) to marry him as of yet. Finn explains that her past may be getting in the way.

Franco catches Nina off guard with his demands that she do something about Charlotte's bullying of Aiden.
A tense, new #GH starts RIGHT NOW on ABC! @TheRealStafford pic.twitter.com/5XUzfMEQ8X

Chase talks about his date with Willow and how her past won’t go away. Chase and Finn realize that they have gone from strangers to caring brothers.

Chase calls Willow for a date but she says she’s busy helping a friend. We know she’s going to go help Kristina. Michael goes to see Sonny and explains the Dawn of Day “Insurance policy”. Shiloh may have some important leverage information held over Sonny. …… flash to preview