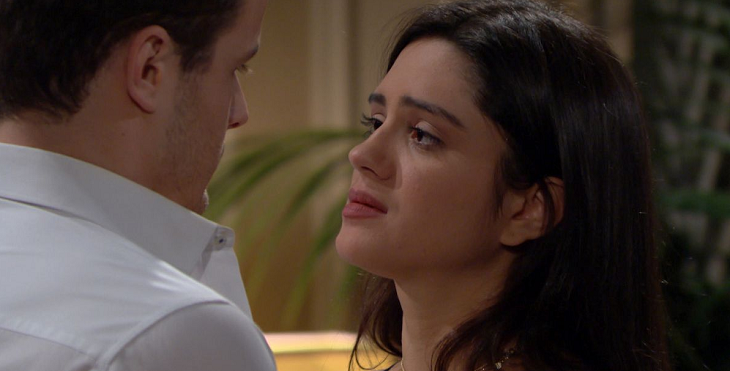 The Young and the Restless (Y&R) spoilers tease that Kyle Abbot (Michael Mealor) will continue to feel conflicted between his wife, Summer Newman (Hunter King) and the woman he is in love with, Lola Rosales (Sasha Calle). Hunter King sat down with TV Insider and she talked about this very complicated love triangle.

Later this week, Kyle will take Summer to the Society–which is the restaurant that Lola is the new chef.  Y&R spoilers say that Kyle will realize something while there with the two women.  Who will he pick?  King reveals some of her thoughts on this love triangle.

“A lot of fun stuff happens with the opening of Society. I love this new set. It’s stunning! They did such a great job with creating this new set. I love shooting big group scenes because you get to see people you don’t normally get to work with,” King said.

“Those tape days can be slightly longer, but even on group day scene,s we don’t get out that late.”

Y&R Spoilers– Summer Is Shocked By Her Feelings For Kyle

At first, Summer married Kyle to win him. She wanted him to pick her.  it was more of a sport to her.  But then he moved on when she broke up with him.  He got a girlfriend and he appeared to be happy.  That’s when Summer figured out she had feelings for him.

“Maybe I’m biased in that I’ve been with Summer for so many years now, but I always want to see the good in her,” Hunter explained.

“She has a genuine love for Kyle. After she turned him down and she saw him get a girlfriend (Lola), she may have thought, ‘Wait…this guy who has always wanted me is now unavailable.’ Back then, it was about winning. But it quickly grew into her realizing that she did truly love him. “

Young And The Restless Spoilers– Who Do The Fans Support Kyle With?

King said that she’s found online, it’s about 50/50 on that.  Many people are Kola fans and other’s are die-hard Skyle followers.

“It’s half for Skyle and half for Kola. I get so many tweets from fans who say they watch the show for the “messiness”! If you love drama, that’s what we give you!” Hunter laughed.

Hunter said that social media has changed the way we talk to each other and gave the actors a platform to directly communicate with their fans (and sometimes their haters too). In the past five years, advertising is completely different and done almost all on social media.

“Instagram has blown up. What else can happen? I’m trying to be better about [using social media]. Kids younger than me, I feel, live and breathe it. People older than I am don’t use it as much,” Hunter said.  “I’m trying to figure it all out.”

So Y&R fans, are you a Kola or a Skyle fan?  Don’t forget to come back to Hollywood Hiccups for more The Young and the Restless (Y&R) spoilers, news, and casting updates!