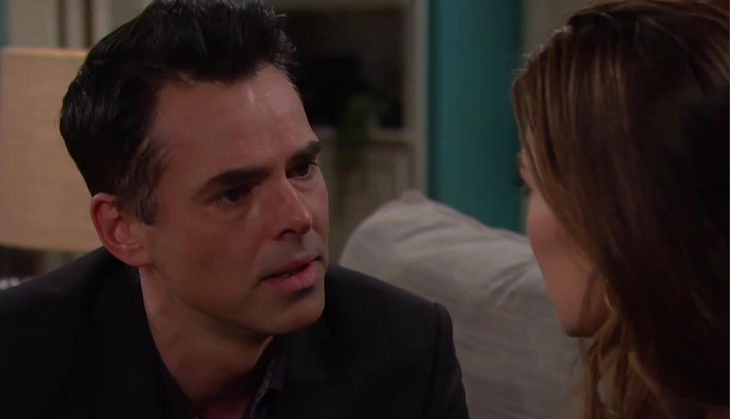 The Young and the Restless spoilers for Thursday, April 18, tease that Phyllis Summers (Gina Tognoni) will barge into Victoria Newman’s (Amelia Heinle) house and interrupt Billy Abbott’s (Jason Thompson) marriage proposal. Billy and Phyllis will leave to talk, and Victoria will text her father and ask him to come home. Victoria will then flash back to some earlier times between herself and Billy, clearly wondering whether she should accept his proposal.

Next on Y&R, Mariah Copeland (Camryn Grimes) and Tessa Porter (Cait Fairbanks) will fill in Rey Rosales (Jordi Vilasuso) and Sharon Newman (Sharon Case) on what happened with the brick and note. Rey will wonder whether Mariah has received any other threatening notes at GC Buzz, and Tessa will volunteer to search through Mariah’s emails.

Rey will advise Mariah and Tessa to change up their routine and pay attention to anything out of the ordinary. Sharon will want them to stay the night at the house, but the ladies will refuse and head back to their apartment. Afterward, Rey will comfort Sharon, who’s clearly worried.

Talk will then turn to Nikki Newman’s (Melody Thomas Scott) job offer for Rey, and Sharon will try to dissuade Rey from taking the gig, as Victor Newman (Eric Braeden) won’t approve of him snooping around in his life. Rey will feel like he owes Victor for falsely accusing him, then change the subject.

In the bedroom, Sharon and Rey will undress and kiss passionately, then fall to the bed. Afterward, Sharon will ask whether Rey will take Nikki’s job offer, and Rey promises he won’t be gone any longer than need be, because this is where he belongs.

Next on Y&R, at Devon Hamilton’s (Bryton James) penthouse, Jett Slade (Gilbert Glenn Brown) and Ana Hamilton (Loren Lott) will discuss the restaurant opening and their respective nerves over their performance together. They’ll consider telling Devon that they’re not ready when Devon walks in.

They’ll ask Devon to sub another artist in, and he’ll agree, but then he’ll have to find another place to use the big poster he made of Ana and Jett, which he’ll show them. Devon will say that everyone is excited about their performance and that he believes that the night would be amazing for all of Jett’s fans. Ana and Jett will agree to perform.

Next on Y&R, Ana and Elena Dawson (Brytni Sarpy) will discuss dresses for the restaurant opening. Elena won’t know what to wear to the opening, and Devon will pop in and offer to pay for a shopping trip for the two them. Elena will say that’s not necessary and leave suddenly. Devon will tell Ana that he has an idea.

Later, Elena will sit on the couch with Ana and lament about how she treated Devon earlier. Devon will arrive with some dresses that were given to Hilary Hamilton (Mishael Morgan) but that she never wore, hoping that Elena might wear one of them. Elena will think that they’re beautiful, and she’ll accept with a big thanks.

Next on Y&R, Billy will show up at Phyllis’ hotel suite and the two will argue about Summer. Phyllis will recount how Summer broke down in her arms earlier, and it’s all Billy’s fault. Billy will admit that he was wrong and sleeping with Summer was a jerk move, but he regrets it.

Phyllis will rail on Billy for what he did to her at Jabot, but Billy will maintain that what happened at Jabot was 100% on her. Billy will say that he just wants the conflict between them to be over. Phyllis will inform Billy about Jack Abbott (Peter Bergman) ripping Fenmore’s away from her, and Billy won’t know what he can do.

Later, Billy will arrive back at Victoria’s home and say that he hopes he’s not too late, and Victoria will tell him that he’s not. They’ll discuss Phyllis’ interruption and business proposition. Victoria will wonder if Phyllis thinks Billy is still in love with her, and she’ll remark that it doesn’t make any sense that Phyllis would come to him for money.

Finally, on Thursday’s episode of Y&R, in her hotel suite, Phyllis will type madly on her laptop, clearly working on something important.