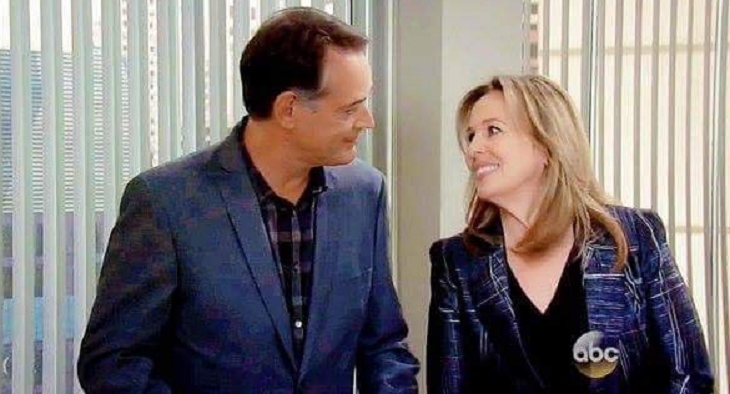 General Hospital (GH) spoilers tease that Dr. Kevin Collins (Jon Lindstrom) will get a warm invitation somewhere by someone this week! Might that be from his wife, Mayor Laura Webber (Genie Francis)?

As General Hospital viewers recall, Laura held off on the divorce from Kevin as she wanted to think things over for a while. She knew he meant well in wanting to heal his psychotic brother Ryan Chamberlain (Jon Lindstrom) although he made an error in judgment by not telling at least her!

General Hospital viewers know if someone had known Ryan was alive when the killings started, the police would be on top of it a lot sooner and lives could have been saved! She may realize that Kevin didn’t ever think that Ryan would overpower him and switch places, and so he thought he didn’t have to tell anyone he was alive.

Something's not right with Kevin… and it isn't a cold. Can Laura see through Ryan's act? A thrilling, new #GH starts RIGHT NOW on ABC! #GH55 pic.twitter.com/SODLyNWzgF

It’s obvious to General Hospital viewers that Laura still loves Kevin, she wouldn’t have posted his bail if she didn’t. She was upset but not upset enough to let him spend time in the Port Charles Police Department jail after spending all those months in a Ferncliff cell!

Other General Hospital spoilers say that she will soften, and that quite likely is a softening towards Kevin. It is true that sometimes long distances can cause a couple to grow apart, but it was obvious to General Hospital viewers who watched Kevin and Laura when they were trapped in the basement of Ferncliff that they had not grown apart!

In a recent General Hospital promo, “Spring Is in the Air”, several Port Charles residents are shown getting cozy with each other and reviving the old ABC soaps saying, “Love in the Afternoon”, and Kevin and Laura are shown kissing!

It looks like from that scene, Laura must be softening towards Kevin considerably, and the warm invitation might be to move back home! Kevin will be very relieved if that happens, then he won’t have to take his ex-wife Lucy Coe (Lynn Herring) up on her offer of a furnished condo, which may have some strings attached – make that tentacles – Lucy’s tentacles!

Stay tuned to General Hospital and keep checking GH spoilers frequently for all the latest news, updates, and spoilers!