The Bold And The Beautiful Spoilers: Hope Has Checked Out — Liam Wants To Save Marriage 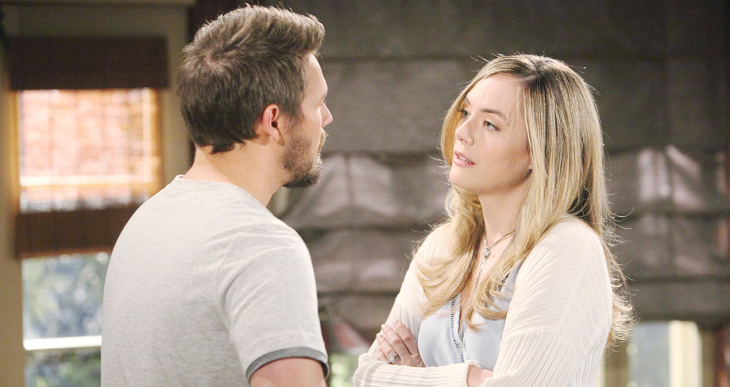 Hope Spencer’s (Annika Noelle) sense of humor reappeared on The Bold and the Beautiful? The love of her life, Liam Spencer (Scott Clifton) took note of that breakthrough but still remains unsettled about his wife.

Anyone and any couple would naturally be in flux after their expected first child was stillborn. To think that ‘Lope’ was duped in a horrible gambling debt scheme is quite simply amazing and very soapy.

Beth Spencer (Isabella de Armas and Redford Prindiville) is believed to have died on Catalina Island. That’s what Reese Buckingham (Wayne Brady) told the Spencer’s and they had no reason not to trust the doctor. How could they know that he’d placed another woman’s just-deceased child in Hope’s arms?

A major lift in Hope’s life, her bond with Douglas Forrester (Henry Joseph Samiri), has been followed by the staggering revelation that Hope’s birth mother is Flo Fulton (Katrina Bowden). Both plot points are allowing Hope to smile again.

The first plot point will remain in place, as Douglas and his dad, Thomas Forrester (Matthew Atkinson), continue to bond with Hope. The Forrester twofer shouldn’t be underplayed, as coming tension related to Flo could force a shift in Hope’s feelings from Liam toward her former flame, Thomas.

As for Liam, he’s remained in touch with Steffy Forrester (Jacqueline MacInnes Wood), while she and the girls have been abroad. Wood’s maternity leave has surely been joyous, as this new mom and her husband spend time with their newborn son.

Bold And The Beautiful Spoilers– Steffy Will Return With Phoebe Soon

Steffy will return to Los Angeles, California in the near future. With her will come the expected clash between truth and fiction. During that time Liam will be there to support Steffy and also, Hope.

Beth is Phoebe, as Flo’s imagined reveal projected. B&B fans were likely guessing that the hoped-for (a pun for sure) one-on-one with Hope, that Flo envisioned, might not flow (another word jab) as smoothly as Phoebe’s faux birth mother expects.

Of course, Hope will be confused and instantly desperate to reclaim her daughter. But Shauna Fulton’s (Denise Richards) initial belief that the Logan’s might offer compassion in response to what they’ll learn feels naive.

B&B Spoilers– Does Liam Have A Reason To Worry About Hope?

Liam’s legitimate concerns about his wife’s grief recovery will shift to family damage control once Hope and her mother, Brooke Logan-Forrester (Katherine Kelly Lang), digest what Reese did.

Then, Hope, Brooke, the other Logan family members, and all connected characters won’t be able to overlook the vital role Flo Logan (yes, that’s her adjusted full name) played in this needless ruse that created devastation for many and will soon crush Steffy.

The Young And The Restless Legend Melody Thomas Scott Celebrates Her Birthday– Here Is How Nikki Newman Become A Icon!