The Young And The Restless Legend Melody Thomas Scott Celebrates Her Birthday– Here Is How Nikki Newman Become A Icon! 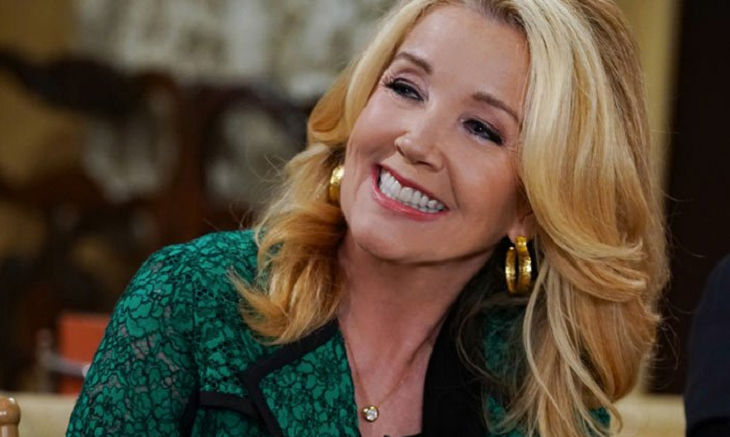 The Young and the Restless icon Melody Thomas Scott celebrates her birthday today, April 18.  She is 63, and she has never looked better.  She is flawless and should be every woman (and man’s) celebrity crush every day.

Scott is known for her role on Y&R as Nikki Newman.  She just celebrated her 40 year anniversary in the role.  The soap opera dedicated an episode to her, showcasing her storylines throughout the years.

As usual, when a Y&R star has a birthday, the co-stars and fans flood to social media to share in their celebration.  And, this time is no different.

Here are the must-see pictures of the beautiful Melody Thomas Scott and some history on how Nikki first appear on Y&R.

How Nikki Become The Matriarch Of Y&R

Every time something happened to the Newman family, the Y&R fans panic that Nikki will leave the show.  For many fans, the show will not go on without her.  And, they are probably right.

She is a very important part of why the Newman family works and she softens Victor Newman’s (Eric Braeden) character.  With his children and business colleagues, Victor is often very standoffish, but with Nikki, he is kind and enduring.

Nikki Was A Y&R Recast

Thomas was one of the most successful recast in soap history.  She took over the role in 1979 after Erica Hope left the role.

Nikki was introduced alongside her sister, Casey Reed (Roberta Leighton) after Nikki had killed her abusive father. During the trial, Nikki dated Paul Williams (Doug Davidson), but they split after he gave her an STD.  She went on to secure a modeling contract, that was a front for a prostitution ring. Eventually, she left town and joined the New World  Commune (Ian Ward’s Cult).  She returned town as Melody Thomas Scott in 1979. In 1980, the only work she could find was being a stripper, which put her in Victor Newman’s orbit.

The Young and the Restless Spoilers: How Will Y&R Write Michelle Stafford Back Into the Show?

That is part of Nikki’s history and why she is such an icon of the show.  She is a rag to riches story as she grew up with very little money.  Little did she know, meeting Victor and having a fling with him would change her life.  They married on the show in 1984 and have been on and off again ever since.

Here are some pictures of Melody Thomas Scott!

Hunter King had her bridal shower over the weekend on Saturday and a bunch of the Y&R actresses attended, including Gina Tognoni, Mel Ordway, Melody Thomas Scott, and Camryn Grimes! #YR pic.twitter.com/qfGuwBzKVY

This Wednesday, February 20th, Nikki looks back on the past as a special episode marking Melody Thomas Scott's 40 years on Y&R airs! #YR pic.twitter.com/q8G0stRxNP

One of TV's beloved leading ladies, Melody Thomas Scott celebrates her 40th anniversary playing Nikki Newman today! In honor of her incredible milestone, Y&R will devote the entire episode to her character. Watch right after @wfsbnews at noon. pic.twitter.com/a70UZbuP20

Hollywood Hiccups would like to wish Melody a very happy birthday.  Don’t forget to come back for more The Young and the Restless (Y&R) spoilers, news, and casting updates!