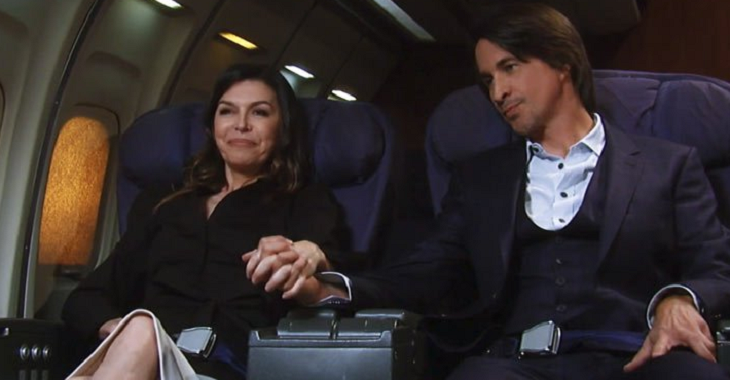 The last time General Hospital viewers saw Finn and Anna, she was tremendously worried that the memories of her being Robin’s mother were those of her twin Alex Marick’s (Finola Hughes) and that Anna was really her aunt, instead of her mother.

Finn had told her there was an advanced DNA test that would prove it for sure, but he would need DNA from all parties involved, and Anna decided that wasn’t an option, since telling the reason for needing their DNA could tear her family apart unnecessarily if it proved Anna was Robin’s mother after all. Finn was called to the hospital, and at some point, after he left, Anna suddenly thought of something and ran to get a box of what appeared to be mementos and started going through it.

Anna's thinking about telling Robin everything, West Coast. But is she being rash? Tune into a compelling, new #GH – STARTING NOW on ABC! pic.twitter.com/fOQgIZiGNz

She found a bracelet and started crying, and when Finn came home, she told him the bracelet proved Robin was her daughter.

General Hospital viewers know this made Anna feel a lot better, but Finn, thinking scientifically, may still want some concrete proof to provide Anna. After all, how does the bracelet prove anything?

General Hospital Spoilers– Is It Possible That Alex Could Be Robin’s Mother?

It wasn’t a hospital bracelet showing Anna’s name and Robin’s birthday with “baby girl Scorpio” on it; and as paranoid as Anna is about all this memory transfer business, she might question that memory about the bracelet as well, and with good reason; longtime General Hospital viewers who also watched “All My Children” when Alex was introduced, and Anna later was found and lived in Pine Valley as well, may recall a scene involving another box of mementoes; this was a wooden box that had apparently had some things of Anna’s as a child as well as Robin’s.

Alex had broken a false bottom out of the box and out came a rag doll, apparently Robin’s. The problem is, both Anna and Alex had flashbacks of being Robin’s mother upon seeing the doll! Other General Hospital spoilers have teased that the two sisters may have intermingled memories since they were the first two twins in the memory transfer study!

Finn may have figured out a way to get everyone’s DNA or find records of DNA tests in the medical system to prove his case to Anna that Robin is really hers. Stay tuned to General Hospital and keep checking GH spoilers frequently to see what happens in this twisted twins case, and for all the latest news, updates, and spoilers!