The Bold And The Beautiful Spoilers: Monday, April 22 – Thomas Puts A Sneaky Plan In Motion – Liam Plans A Romantic Evening 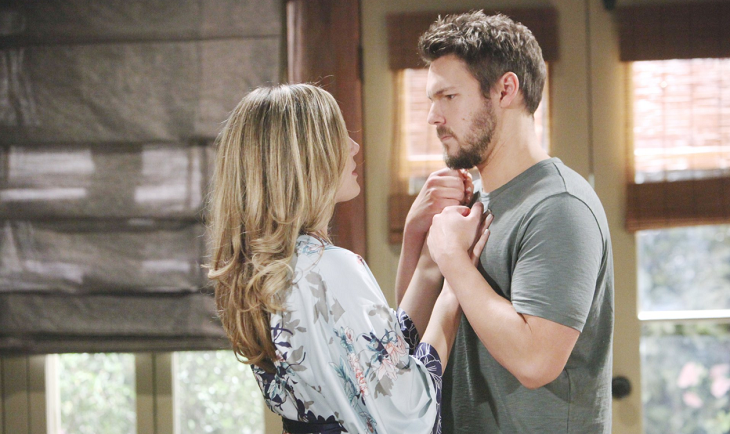 The Bold and the Beautiful (B&B) spoilers for Monday, April 22, tease that Thomas Forrester (Matthew Atkinson) will get sneaky. Recently, Hope Spencer (Annika Noelle) disclosed to him some of the problems that she and Liam Spencer (Scott Clifton) are having – specifically, that she nearly gave Liam her wedding rings back and sent him back to be with Steffy Forrester (Jacqueline MacInnes Wood) and the girls.

B&B viewers could clearly see a lightbulb go on in Thomas’ head. He recently revealed to Ridge Forrester (Thorsten Kaye) that he wasn’t completely over his feelings for Hope, and it’s becoming clear that he wants her once again.

Thomas is interested in Hope for his own sake, but also for the sake of his son Douglas Forrester (Henry Joseph Samiri). Hope is quickly becoming a mother figure to Douglas, and Thomas would like to make that permanent.

According to B&B spoilers, Thomas will move forward with a plan to ultimately get Hope for himself and Douglas. He’s already begun by floating the idea of designing for the Hope For The Future line. He probably thinks that if he is working closely with Hope at Forrester Creations and helps her revitalize her line, they’ll become closer. It would certainly be a way to be around Hope virtually all of the time.

Other B&B spoilers say that Thomas will even play on Hope’s emotions going forward. He’ll arrange for Hope to videoconference with Steffy, Phoebe Forrester (Isabella de Armas and Redford Prindiville) and Kelly Spencer (Chloe Teperman and Zoe Pennington), in an attempt to convince Hope just how much Kelly and Phoebe need Liam. His ultimate goal will be for Hope to send Liam off to Paris for a while.

Next, on the new episode of B&B on Monday, April 22, Liam will enact a plan of his own involving Hope. Liam spent some time with Wyatt Spencer (Darin Brooks) and Sally Spectra (Courtney Hope) recently, and at the end of their conversation, he vowed to fight for his marriage. The way Liam sees it, he made vows to Hope for better or for worse and plans to honor that promise.

So, B&B spoilers say that Liam will plan a romantic dinner for himself and Hope, to show her that life goes on and that they can still enjoy each other’s company. Liam and Hope have not made love since their daughter’s death, and they need to spend some time together reconnecting and getting back some of the intimacy they’ve lost.

It looks like Liam will be hoping that their romantic evening will be a step in the right direction for them. Hope will be appreciative of Liam’s efforts, and although her mind will still be on their daughter, she’ll try to make the best of the evening and not disappoint her husband.

The Bold And The Beautiful Spoilers: Quinn To Wyatt– Dump Sally– Suggests She’s Cheating With Thomas!