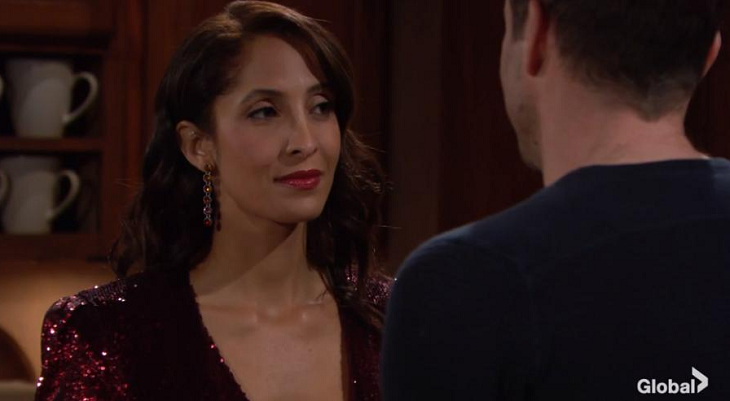 The Young and the Restless (Y&R) spoilers tease for the week April 22 that Lane will have some resolution and the fans will hear Lily Winters’ (Christel Khalil) final answer to Cane Ashby (Daniel Goddard0 on whether she wants to work things out with him.

It will be emotional as they also deal with the painful loss of her father, Neil Winters (Kristoff St. John).  Here’s what you need to know about what’s ahead on Y&R.

Per Cane’s request, Lily goes to the opening of Society with him.  The move shocks Devon Hamilton (Bryton James) as he thought they were over.  Y&R spoilers say that he isn’t sure if that means they are back together or not. It’s confusing for him.

And, he’s not the only one.  Cane seems to think that they will work things out and settle back into married life.  However, Lily isn’t willing to try anymore.

Young And The Restless– Is Lane Over?

Christel Khalil shares to Soap Opera Digest that Lane is definitely done. Lily cannot invest any more time into her marriage. She feels that it is the best thing for all involved– herself, Cane and the kids.

“Cane and Lily already had this conversation where she told Cane not to read into them getting back together and he assured her that after this one night, they’re done,” Khalil shared.

For 12 yrs #Lane has shared a ❤️ threatened by tragedy & adversity, but this week they will be tested like never before when Lily is released from prison & Cane is willing to do what ever it takes to save his family & life with his 1 #truelove R u ready? Can ❤️ conquer all? #yr pic.twitter.com/bOCw6tgUt0

Devon really enjoys having Lily there on his big night, too.  Despite the rocky history and her role in Hilary Hamilton’s (Mishael Morgan) death, he is so happy his sister is back and no longer in jail.

When the twins arrive, for a brief moment, the family is reunited and Lily shares a moment with Cane.  That’s when Devon pulls her aside and gives her the third degree about it.

“Lily assures Devon that there is nothing going on between them and she is going through with the divorce. Lily knows she and Cane will always love each other but it’s just not working with them anymore. She intends to work at the prison, so she will move near there. She wants to do something that will make a difference instead of settling back into her life in Genoa City,” Christel explained.

Devon will then ask Lily if she has heard from their dad, to which she will say no.  Y&R spoilers say that Devon will worry that something isn’t right, especially after he cannot get ahold of him. Worried, Devon takes off to go check on him.

What he finds will forever change the Winters family.  Will Neil’s death reunite Lane?  We’ll have to keep watching Young and the Restless to find out.

The Young And The Restless Spoilers: Nick Sees Lola And Kyle Kiss– Will He Tell Summer?