The Young And The Restless Spoilers: Nick Sees Lola And Kyle Kiss– Will He Tell Summer? 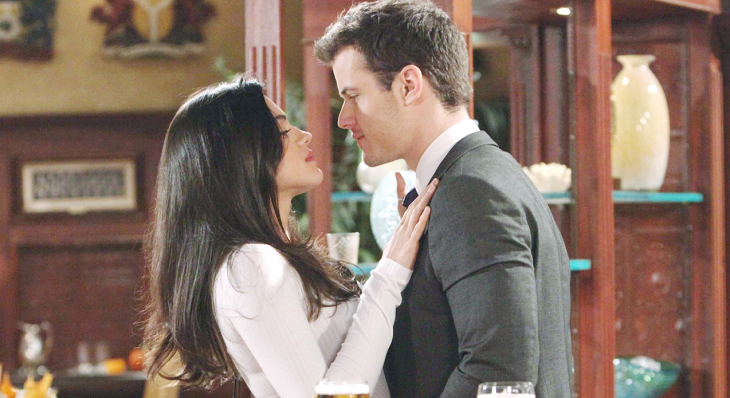 The Young and the Restless (Y&R) spoilers for the week of April 22 tease that Nick Newman (Joshua Morrow) will see Lola Rosales (Sasha Calle) and Kyle Abbott (Michael Mealor) kissing.

Nick will be put in a tough spot.  Does he tell his daughter about it or will he confront Kyle himself?  Here’s what you need to know about what’s coming up on Y&R.

At the opening of Society. Summer Newman (Hunter King) pulls Devon Hamilton (Bryton James) aside to tell him how great the place is.  She will be blown away with how the restaurant looks and the overall vibe.  Kyle will sneak away while his wife chats with Devon.

Should Summer be worried? #YR pic.twitter.com/cLLIUY5ZWY

“Lola was hurt by Kyle marrying Summer but her feelings for him never went away. She believes she and Kyle are meant to be together and that Summer is nothing but a temporary complication,” head writer Josh Griffith shares to Soap Opera Digest.

Kyle grabs Lola and pulls her aside.  Y&R spoilers say that he just wants to steal a moment to spend with her. Kyle leans in to kiss Lola as Nick witnesses the whole thing.  As you can imagine, he is furious that Kyle would disrespect his daughter like that.

After Lola leaves to go back to the kitchen, Nick approaches Kyle and lets him have it.

“At first, Kyle isn’t sure what Nick saw, so he tries to downplay it. Before Kyle could explain himself any further, Summer comes to his defense.,” Griffith adds.

Nick tries to tell Summer what he saw between Lola and Kyle, but she refuses to listen to him.  Y&R spoilers say that Summer knows it will take Kyle some time to come to his sense and stop seeing Lola, but she’s confident he will eventually choose her over Ms. Rosales.

“Kyle will need to be careful now as he’s quickly getting on both Nick and Phyllis’ (Gina Tognoni) bad sides, which is never a good thing,” Josh warned.

What will Summer do next to keep Kyle away from Lola?  Don’t forget to come back to Hollywood Hiccups for more The Young and the Restless (Y&R) spoilers, news, and casting updates!