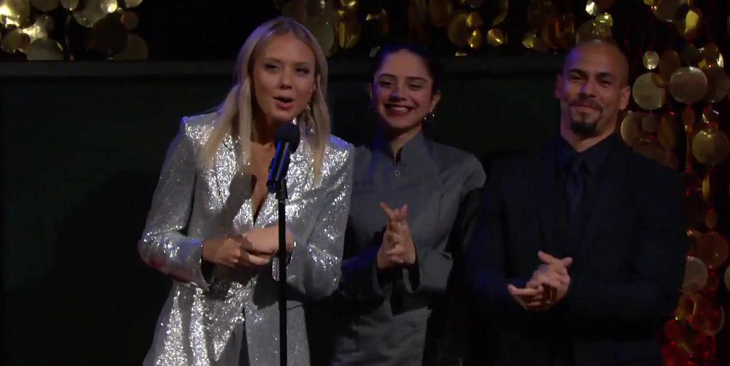 The Young and the Restless (Y&R) spoilers for Monday, April 22, tease that Abby Newman (Melissa Ordway) will be panicked because she’s got no customers at her new restaurant, Society. She’ll receive a bouquet from Victor Newman (Eric Braeden), and Devon Hamilton (Bryton James) will arrive and say that he’s sure people will show up.

Across the room, Lola Rosales (Sasha Calle) will marvel at Summer Abbott’s (Hunter King) present for her…a knife. Lola will tell Summer that it’s bad luck to give a knife as a gift unless it’s given with a coin. Summer will present Lola with a quarter, wish her luck, and tell her that her necklace is pretty. She and Kyle Abbott (Michael Mealor) will then walk away.

Eventually, a crowd will arrive at Society, including Nick Newman (Joshua Morrow) and Jack Abbott (Peter Bergman). Rey Rosales (Jordi Vilasuso) and Arturo Rosales (Jason Canela) will arrive, and Lola will tell them that she knows things are strained between them now, but they need to fake it for tonight. Mia Rosales (Noemi Gonzalez) will be outside trying to get in, but her name won’t be on the list.

Next on Y&R, at Devon’s place, Ana Hamilton (Loren Lott) and Jett Slade (Gilbert Glenn Brown) will discuss their nerves, and Jett will tell Ana that she’s his inspiration. Devon will arrive and tell them to break a leg, then when he’s alone, he’ll gaze at a photo of himself with Hilary Hamilton (Mishael Morgan), then remove his wedding ring. Elena Dawson (Brytni Sarpy) will come downstairs and Devon will tell her that she looks stunning.

At Society, Jack will be horrified to see the Jabot receptionist promoting Jack of Hearts when Ashley Abbott (Eileen Davidson) appears and says that the receptionist works for her now. Devon will then arrive with Elena, who will note that everyone’s staring at them.

Young And The Restless Spoilers– Jabot War Gets Ugly

Nate Hastings (Sean Dominic) will arrive at the event, while Ashley and Abby talk at the bar. Abby will say that she hopes Ashley isn’t there to sabotage Jabot. Devon will approach and chastise Ashley for bringing My Beauty products to the event, but Ashley will say it’s just a little self-promotion.

Next on Y&R, Ana and Jett will perform while Summer catches Kyle staring at Lola. When Jett finishes singing, an advertisement for the “Jabot Collective” will appear on the screen behind him.

Meanwhile, Mia will manage to sneak into the restaurant and head to the bar, where she’ll encounter Jack. She’ll tell Jack that she’s sorry that Kerry Johnson (Alice Hunter) left, and that she’s almost single again, too. In the back of the restaurant, Kyle will kiss Lola, and Nick will see the whole thing. A scuffle will ensue until Summer breaks it up and tells Nick to stay out of her marriage.

Mia will tell Jack that Rey betrayed her. Jack, clearly uncomfortable, will listen until Rey comes along and intervenes in the conversation. Mia and Rey will argue, and Abby will notice the argument. Arturo will then come by and announce that Mia is pregnant, which will lead Abby to ask them both to get out of her restaurant.

Next on Y&R, Jett will be grateful toward Devon for the evening, and he’ll tell Elena that Devon is a good man. Ashley and Jack will discuss how they’ve destroyed their sibling relationship, but they won’t agree to compromise. Ashley will state that she wired back all his money and that My Beauty will get into the clothing market. Her collective will be called “The Abbott Exchange.”

Young And The Restless Spoilers– Rey Threatens To Turn Mia In

Finally, on Monday’s episode of Y&R, Lola will watch as Kyle leaves the party with Summer. And in Mia’s hotel room, she’ll taunt Rey and get close to him, stating that he’ll never have this type of passion with Sharon Newman (Sharon Case). Rey will tell her that if she doesn’t do as he asks, her baby will be born behind bars.