‘Bold And The Beautiful’ Weekly Spoilers April 22 to 26 : Thomas Vows To Win Hope Over – Quinn Attacks Sally – Things Turn Near Fatal For Zoe 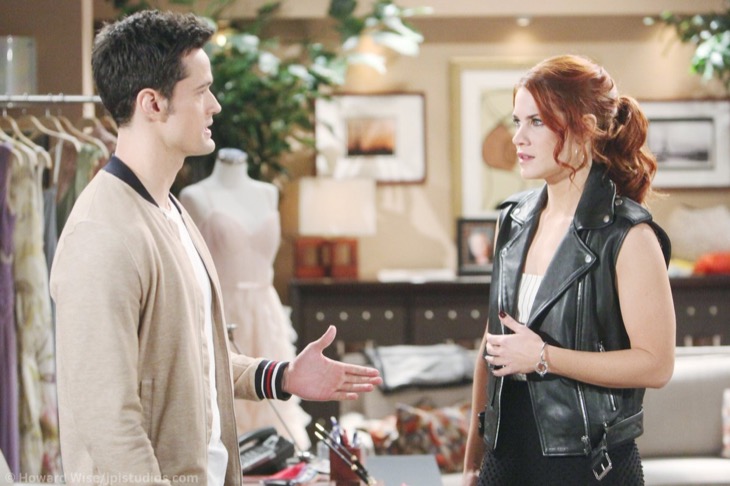 “Bold and the Beautiful” (B&B) spoilers for the week of April 22 tease that things are getting intense for a couple of characters.  For one, Wyatt Full (Darin Brooks) will have his hands full with his mother, Quinn Fuller (Rena Sofer) meddling in his business again.

Also, Thomas Forrester (Matthew Atkinson) is determined to win Hope Logan (Annika Noelle) over, even though she is married to Liam Spencer (Scott Clifton).  Lately, the baby drama with Flo Fulton (Katrina Bowden) takes a near fatal turn when she ends up knocked out cold on the floor and her mother Shauna Fulton (Denise Richards) has a gun drawn pointed at Zoe Buckingham (Kaira Barnes).  It looks like a great week ahead on B&B.

Early in the week, Thomas decides that he’s going to fake some drawings that he tells Hope were Douglas’ drawings for her.  He’s hoping to pull at her heartstrings.  Thomas admitted to his father Ridge Forrester (Thorsten Kaye) that he has unresolved feelings for Hope.

The Bold And The Beautiful Star Katrina Bowden Talks B&B, Flo’s Connection To Wyatt, And Working With Denise Richards

B&B spoilers state that Hope only has eyes for Liam Spencer (Scott Clifton).  She wants to put her marriage back together.  The fans are getting worried that Thomas might try to force her to compromise her marriage. We’ll have to wait to see how it pans out.

B&B spoilers state that Quinn will battle Sally again. She will try to convince Wyatt that Sally isn’t good enough for him.  She will imply that she may be cheating on him with Thomas.  Of course, that isn’t true, but the fact Sally admits she’s texted with the designer since his return will give Wyatt something to think about.

Later in the week, Quinn shows up at Wyatt’s place and demands Sally leave as she isn’t good enough for her son.  When Sally refuses, the two exchange words.  Wyatt will walk in on the squabble and he forces his mother to apologize.

Today on #BoldandBeautiful, Wyatt and Sally worry about Liam and Hope. pic.twitter.com/6nAvmQGHqi

While it appears that the battle is over, Quinn probably isn’t ready to accept defeat.

Flo is ready to come clean with Hope.  Now, that they are family, keeping this big secret from her is even more painful.  So, she plans to let her new cousin know what she did and that Beth is alive. However, Zoe intervenes and refuses to let her confess.

The brawl turns violent and somehow Flo even up on the floor knocked out.  Shauna feels threatened and pulls a gun on Zoe.  It’s clear that Zoe attacked Flo in some way.  It will all come out on Friday, April 26.