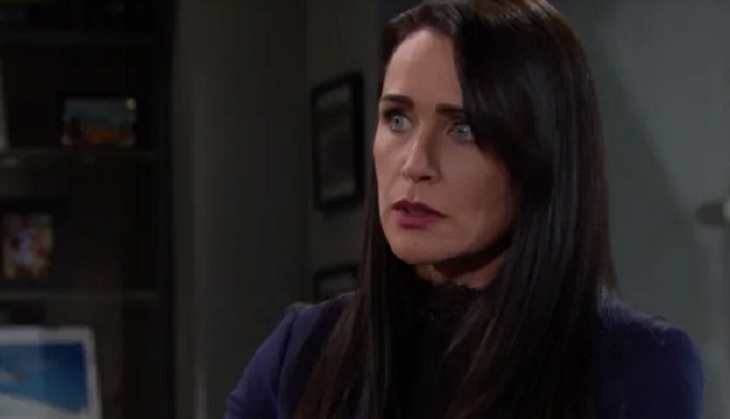 The Bold and the Beautiful (B&B) spoilers for Tuesday, April 23, tease that Liam Spencer (Scott Clifton) and Hope Spencer (Annika Noelle) will take a major step forward in their relationship. They’ve just had a major discussion about their marriage, during which Liam flatly refused to walk away from Hope and promised to uphold his wedding vows no matter what.

Of course, these two have had a difficult few months, as they lost their daughter and have been dealing with that terrible loss. And Hope has been dealing with intense guilt over keeping Liam away from Kelly Spencer (Chloe Teperman and Zoe Pennington) and Phoebe Forrester (Isabella de Armas and Redford Prindiville). It’s been a lot to overcome.

But it looks like Liam and Hope will have a breakthrough on Tuesday’s episode of B&B. Liam will be successful in getting Hope to relax and enjoy a romantic evening, and the two will ultimately make love for the first time since their daughter’s death. It will be a big step for the couple, as they reconnect and strengthen their bond.

Thomas goes full steam ahead with his plan to make Hope his own. WATCH FULL EPISODE: https://t.co/7428ydGj4m #BoldandBeautiful pic.twitter.com/5sjRXKG0VZ

Meanwhile, on the new episode of B&B on Tuesday, April 23, Quinn Forrester (Rena Sofer) will be on the warpath. She’s on a new mission to undermine her son Wyatt Spencer’s (Darin Brooks) relationship with Sally Spectra (Courtney Hope), and on Tuesday’s episode, she’ll find a way to go after Sally and make her life miserable.

The Bold and the Beautiful spoilers say that as Sally finishes up a conversation with Thomas Forrester (Matthew Atkinson) at Forrester Creations, the two exes will embrace. There won’t be anything untoward about the hug; they’ll just be expressing their friendship.

But Quinn will spot Thomas and Sally hugging, and her blood will boil. Quinn thinks that Sally isn’t good enough for Wyatt and that Wyatt should be with Florence “Flo” Fulton (Katrina Bowden) instead. She’ll be furious that Sally was in a compromising position with Thomas, and she’ll confront Sally about it and make an issue of the whole thing.

The Bold And The Beautiful Spoilers: Flo Faces Maternity Test — Logans Will Be Stunned By DNA Shocker — Beth Is Alive!

B&B spoilers say that Quinn will blast Sally about spending time with her ex, and she’ll even question Sally’s loyalty to Wyatt. Look for an intense argument between Quinn and Sally. Also, look for Quinn to eventually run to Wyatt with news about what she witnessed. Quinn’s really out to cause trouble for Wally!