General Hospital Spoilers: Maxie Surprises Peter– Will They Finally Take Their Relationship To The Next Level? 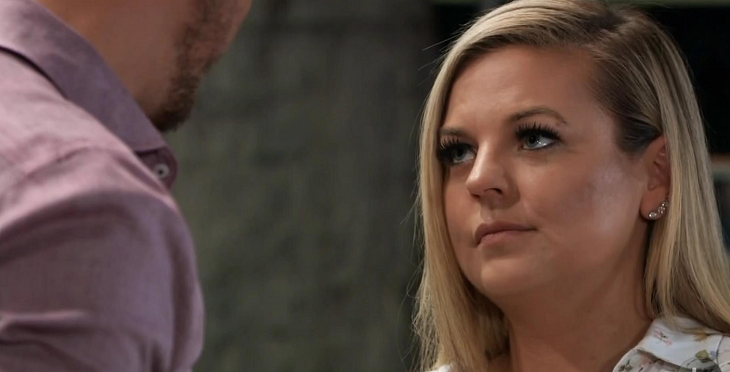 General Hospital (GH) spoilers tease that Maxie Jones (Kirsten Storms) will surprise Peter August (Wes Ramsey) and maybe invite him to stay the night this week. A preview video called, “A Spring Romance” shows Maxie and Peter in what appears to be Maxie’s bedroom, in a clinch; will they finally take their relationship to the next level?

Many General Hospital fans have been excited to see Maxie finally move out of the stages of grief for her late husband Nathan West (Ryan Paevey) and start living life as a young single woman again. Peter and Maxie have had a long, awkward, sometimes off and on relationship which required the help of Anna Devane (Finola Hughes) Peter’s birth mother – or possibly aunt – and Maxie’s godmother – to get off the ground and to finally put their cards on the table!

Maxie has had to learn that “signals” don’t work with Peter: he neither knows how to give them or receive them! He’s a straightforward kind of guy, and being straightforward is the best way to communicate with him!

GH Spoilers– Maxie Needs To Be Straight With Peter

As many General Hospital fans guessed, Peter admitted to Maxie in a recent episode that he didn’t have a lot of experience with women or dating. He said to her he’d had a few non-serious relationships but even that is doubtful, with the way he grew up.

Maxie is probably his very first girlfriend, serious or non-serious, ever, and she will need to learn to take the lead once in a while so he knows where she’s coming from!

The one time when General Hospital viewers did think that “love in the afternoon’ might happen between them, baby James (the Marciano twins) interrupted them!

General Hospital Spoilers– What’s Ahead For Maxie And Peter?

General Hospital viewers in the United States did not see this love scene between Maxie and Peter previewed in the “Spring Romance” video come to fruition the week it was said to because world news reports pre-empted and pushed everything ahead a day.

Maybe this week GH fans will finally see Maxie and Peter take it to the next level! Stay tuned to GH and keep checking General Hospital spoilers frequently for news, updates, and new spoilers!