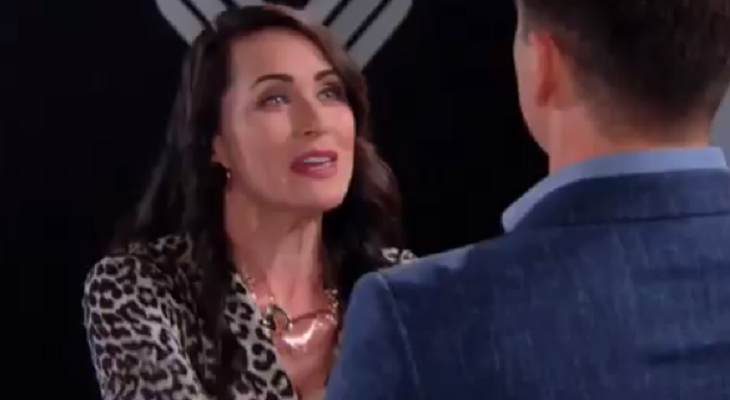 The Bold and the Beautiful (B&B) spoilers for Wednesday, April 24, tease that Thomas Forrester’s (Matthew Atkinson) sneaky plan will work just as he’d hoped. Thomas just showed Hope Spencer (Annika Noelle) a video of Kelly Spencer (Chloe Teperman and Zoe Pennington) calling out for her “da-da” that he got from Steffy Forrester’s (Jacqueline MacInnes Wood) nanny. And according to Thomas, the video shows how much Kelly misses her father, Liam Spencer (Scott Clifton).

Hope seemed completely stressed by the video, which played right into her fears about her marriage and Liam’s relationship with his daughter. Hope has been feeling terrible that she is keeping Liam from Kelly and Phoebe Forrester (Isabella de Armas and Rosalind Aune), and the video will only make her feel worse.

Of course, this is all happening right after Hope and Liam have spent time together reconnecting and repairing their relationship. But judging from Hope’s reaction to the Kelly video, it looks like she’ll start worrying again about keeping Liam away from his family.

Kelly is so cute! 😍 #BoldandBeautiful pic.twitter.com/piw0xJ3q0q

Look for another serious conversation between Hope and Liam about Liam taking a trip to Paris to visit Steffy and the girls. According to B&B spoilers, Liam will soon take off for Paris to pay his daughter, Phoebe, and Steffy a visit, so it looks like Hope will get her way on this one.

Meanwhile, on the new episode of B&B on Wednesday, April 24, Sally Spectra (Courtney Hope) will be on the receiving end of Quinn Forrester’s (Rena Sofer) wrath. Quinn recently saw Sally hugging Thomas at Forrester Creations, and she went ballistic. Quinn ran right to Wyatt Spencer (Darin Brooks) to tattle on Sally and cause trouble for the pair.

But Wyatt didn’t buy what his mom was selling. Wyatt trusts Sally and didn’t believe Quinn when she said that she saw Sally in Thomas’ arms. Wyatt assured his mother that she obviously misunderstood what she saw and he basically told her to mind her own business.

But Quinn is determined to get Wyatt away from Sally, so that he’s freed up to eventually be with Florence “Flo” Fulton (Katrina Bowden). Quinn loves Flo and desperately wants she and Wyatt to start dating again.

Bold And The Beautiful Spoilers– Wyatt Forced To Take Sides

On Wednesday’s B&B episode, Quinn will make a move against Sally. The Bold and the Beautiful spoilers say that Quinn will take Sally off guard and question her living arrangements. Of course, Sally lives with Wyatt, so we might see Quinn insinuate that Sally should get her own place or that she’s freeloading off of Wyatt.

Of course, Sally isn’t one to back down from a fight, so she’ll probably let Quinn have it and tell her to mind her own business. Look for a feisty argument between the two ladies as Quinn sticks her nose where it doesn’t belong.

The Bold And The Beautiful POLL: Will Thomas’ Plan To Split Hope From Liam Work? Vote Now!